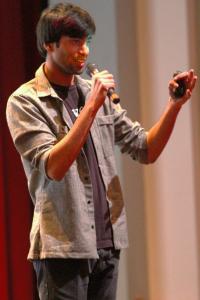 Ablack is best known for his role in “Degrassi: The Next Generation.” As Sav Bhandari, an Indian boy, he had to naviage the problems of being a teenager and an arranged marriage.

According to Ablack, this role had an impact on his life because the show “Degrassi” was part of Free the Children, an organization started by a 12-year-old boy named Craig Kielburger.

Kielburger started the group because of a story that talked about a boy in Pakistan who was murdered because he talked about what child labor did to him.

“Free the Children is a network about children helping children through education,” Ablack said.

Ablack talked about a branch of Free the Children called Me to We, which allows college-age kids the opportunity to make a difference by tweaking the way we live to help others in less fortunate areas.

Ablack focused on the work he did in Kenya which he said reminded him of his role when he was 11 as young Simba in the stage show of the “Lion King.”

Ablack spoke about the community he grew up in, which he described as a racist community in Toronto, Ontario, Canada, that had little sense of community.

“We live in a ‘me’ society in North America where we go through great pains to make ourselves perfect based on images thrown at us,” Ablack said.

In Kenya he said he learned about inner strength through young children who had to wake up early to do hard labor for their families, the moms who walked two hours to get dirty water for their families and parents who were so proud to show off their homes that were small and did not have much.

“We live on the same planet, but our lives are so different,” Ablack said.

Ablack said he did not appreciate the tribulations of an arranged marriage until he met a girl who was not free to pick her own spouse.

Ablack expressed that we lack a community they have in Kenya. Even though we can help them with building schools so dreams can be achieved, they can teach us about measuring happiness. Despite the fact they have so little, they do have a sense of community where everyone in the town celebrates birth and achievements.

“I felt like I was back on the stage in ‘The Lion King’ with a great sense of community,” Ablack said.

Ablack had a postive impact on the students who attended his presentation.

“Ablack talked about something we rarely hear about, and it was a good hard look at how we need more community here and how much of an impact we can have on others,” freshman Molly Beichner said.

“I have been to a Mercy School before, so I have heard and knew some of the things he talked about, but it was interesting to hear a new perspective on it and what others feel and see and experience,” freshman Katie Felong said.

Ablack used his “claim to fame” as an actor to talk about Me to We, Free the Children and community as part of this year’s Mercy Week.