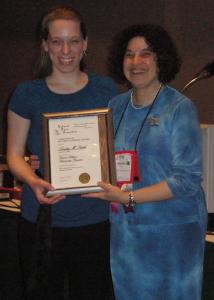 The NDA Student Literary Award recognized Smith for a paper she had written concerning the connection between dance and the Christian religion. Encouraged by her professor, Ms. Christine Hay, Smith had submitted the paper to the NDA Journal last spring.

The paper, entitled “Dance and Religion: Christianity’s Perspective,” had been written for a Dance History class and discusses the role dance has played in the Christian religion.

A month ago, Ms. Tauna Hunter, Director of the Dance Department, informed Smith that her paper had not only been accepted and published in the NDA Journal, but that it had received the NDA’s Student Literary Award. In addition to its honorable acceptance, Smith was also invited to attend the NDA and AAHPERD conference, in Indianapolis, Ind.

Given a grant by the college, Smith traveled by plane to the conference Thursday afternoon. While at the conference, Smith graciously accepted her award.

Smith also discussed the possibility of interning with the NDA over the summer with Colleen Dean, Program Manager for the NDA, and Gabriella Berkow, last year’s intern. After a full day in Indianapolis and at the conference, Smith returned to Mercyhurst campus Friday night.

“Dance and Religion: Christianity’s Perspective” discusses the importance of dance in biblical history and explores the use of sacred dance throughout both early and modern worship. From an early age, Smith had an interest in finding a meaningful connection between her dancing and her religion.

“Personally, I have always questioned my involvement with dance because my grandmother never approved of it,” Smith said.

In her search to reconcile her dancing with her religion, Smith discovered that historically dance has been accepted and even intertwined with religion. Dance has been used as a form of worship in both early and modern times. “It is actually encouraged in the Bible,” Smith said.

Her paper utilizes excerpts from multiple books of the Bible, including Samuel, Exodus and Psalms, to emphasize the important historical role dance has played in the Christian religion.

Smith is humbled and excited by her achievement. Her family, friends and instructors, especially Ms. Hay and Dr. LaChappelle, who advised her in her submission, are also very proud of her outstanding work and accomplishments.