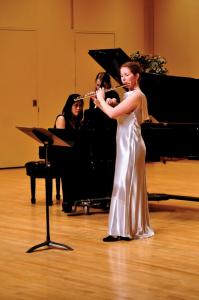 Tyler Stauffer photoBeautiful flute music could be heard in Walker Recital Hall this week, as the D’Angelo Department of Music presented yet another part of its Faculty Recital Series.

Freshman Sarah Benson agreed that there were “some very interesting repertoire choices for this recital.”

The recital started off with a duet titled “Suite of Three Pieces for Flute and Piano” by Benjamin Godard. The three pieces were titled “Allegretto, Idylle and Valse,” and were supposed to convey the feeling of a carnival.

Next on the program was another duet, but this time between flute and violin. Assistant Professor of Strings Dr. Barton Samuel Rotberg joined Meyer for this piece, which is simply titled “Duet,” by Friedrich Kuhlau.

Meyer then played a piece titled “Jeux” by Jacques Ibert. However, this is a misnomer. One might think that this would be a light and easy piece, yet it is anything but that. The two movements are full of constant motion and contrast between the flute and piano.

Meyer left the stage to play the next piece, which was a short song titled “Syrinx,” by Claude Debussy. This was an interesting effect, though it might have been confusing to most audience members.
The next piece was a theme and variations piece by Theobald Boehm, with the theme being the well-known Italian song “Nel Cor Piu” by Giovanni Paissielo. To introduce the theme, Assistant Professor of Voice Brent Weber sang while Meyer began her piece. This was an interesting way to combine different instruments and different songs that use the same melody.

Meyer closed her concert with “Concertino,” by Gaetano Donizetti.

The Faculty Recital Series was well-accepted by students. “It’s great and inspiring to see our teachers and the other faculty performing and collaborating, and just doing what they do and what they want us to do,” sophomore music major Erin Hepler said.