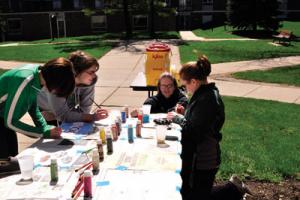 Despite numerous difficulties, the second annual Take the Walk and Style Your Sole Party met with success on Saturday, April 10.

The Art Therapy Club and TOMS Campus Club made a joint effort to host the one-mile walk around the Mercyhurst College campus.

Participation in the walk was free, and each walker had one dollar donated in his or her name to raise AIDS awareness.

The money raised at the event was donated to TOMS Shoes, a for-profit organization that provides shoes to children in developing nations.

“(TOMS Shoes) has a One for One movement, which means that for every pair of shoes…that they sell, a pair of shoes goes to a developing nation or a disaster area for children and adults who are currently living without shoes,” junior Casey Harvilla said.

“Most of these developing countries also have a rather high rate of disease, namely AIDS, so the walk this year is going to support both causes,” Harvilla said.

Last year, 35 people participated in the fundraiser, but this year, only 25 people took the walk. Harvilla explained that weather likely caused the drop in numbers.

“We had a good turnout for it being so cold,” she said.

The walk ended in a Style Your Sole Party outside the Herrmann Student Union, where participants enjoyed refreshments and had the option to tie-dye shirts.

Paints were set out to style TOMS shoes, which several students had pre-ordered. However, many of the shoes did not arrive in time for the event, so the shoes will be decorated at another time.

Even so, participants did not seem disappointed with the event.

Sophomores Korrine Hallen and Sarah Blair enjoyed complimentary lemonade while recovering from the one-mile walk. Like several other participants, they chose to walk without shoes.

“I think everyone should try to walk barefoot,” Hallen said.

Blair said, “It shows what it’s like to walk without shoes. It hurts.”

For more information on the event, contact Casey Harvilla at charvi38@mercyhurst.edu or visit takethewalk.net.