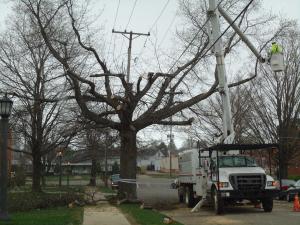 Two trees were cut down in Lewis Avenue by the Penelec company.

Just two weeks before the United States celebrates Earth Week, the cutting of trees on Lewis and Briggs avenues reminded students of the importance of Mother Nature.

“How would you feel if we did not have trees on campus?” Green Team members asked this question last Friday. Be it inspirational or for its practicality, surroundings do influence student life.

Overall, one does not need to be a die-hard environmentalist to appreciate what nature gives us. Rather than focusing on sentimentality, or morality for that matter, let us explore some facts surrounding the incident.

From a biological standpoint, trees give us the air we breathe. Interestingly enough, trees also keep noise pollution in order. According to the US Environmental Protection Agency, “Studies have shown that there are direct links between noise and health.” In fact, noise pollution can cause problems relating to stress, high blood pressure, speech interference, hearing loss, sleep disruption and loss of productivity

The college’s geography might also be something we should consider. If trees mitigate the flow of storm water run-off, we should then analyze long-term effects of these tree cuts.

“The college has been working hard for years to address the problem of storm water flow, and trees help us to do that,” environmental historian and Green Team Chair Dr. Chris Magoc said.

Granted, there are more trees on campus. If the city of Erie decides to cut down a couple of trees on Lewis Avenue, for example, it does not necessarily mean Mercyhurst students living on campus will immediately suffer from noise pollution-related illnesses. Trees and sunlight are said to improve mood; nonetheless, students are very familiar with stress, especially those seniors graduating in this economy.

Perhaps the most surprising aspect of last week’s incident was how it came about. “I was pretty shocked to find out that they would be cutting down entire trees,” senior Ian Michalski said. “I felt like they could have just trimmed the branches that were near the power lines.”

It was rather surprising how the notification was sent out to students. The e-mail sent by the Department of Police and Safety on Tuesday, April 6, was addressed to all students concerning student parking. No explanation was given as to why the trees were getting cut down.

Had the Green Team not inquired about their reasoning, the issue would have gone by unnoticed. Police and Safety did clarify they were not advocates of cutting the trees down but that the trees represented a fire hazard.

“I think it was unfortunate that they are cutting the trees,” senior Oscar Ordonez said. “They should have thought of another way to solve the problem with the electric wires.”

Senior Libny Tovar said, “(Penelec) didn’t look for alternative ways to solve the problem and just went for the easy way without researching for the best way to fix the problem and avoid damaging the trees and the environment.”

Whether Mercyhurst College has or does not have a say on the cutting of the trees, the administration does have a say on the information it shares with students. Students do have a right to be properly informed of the goings-on of the college. This is especially so when it regards something which will affect us all.

“I understand it would have been difficult to fight an entity like Penelec, so my next thought was whether the trees would be put to some greater use,” Michalski said. 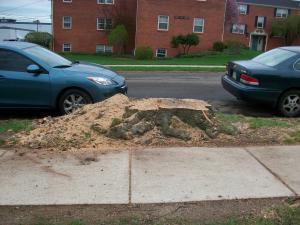 This is all that’s left of the three trees that were cut down in Lewis Avenue.