Hitler exposed by a look at his private library 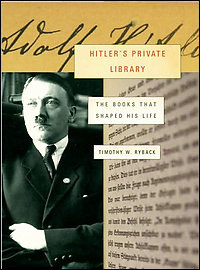 Contributed photoIn “Hitler’s Private Library: The Books that Shaped His Life,” Timothy W. Ryback discusses how a man without a high school diploma becomes one of the most powerful men in the 20th century, analyzing the Fuhrer’s personal library in order to examine how these readings affected his life and therefore his decisions. The book is divided into 10 chapters that focus primarily on one book, although others may be mentioned. It starts with Hitler’s ‘frontline reading’ in the First World War and continues to his death. Though at first this set-up was annoying, the chronological layout helped me to understand the development of Hitler’s thought.

The books Ryback centered on are almost inconsequential for two reasons. The first is that many of the books were written at a time when anti-Semitism was prevalent, and therefore attitudes in the books themselves reflect this and cause them to lose credibility. The second is that the average American will never even have heard of most of the books, as most of them were written by German authors from surrounding European countries.

Given this disclaimer, some of the books Ryback used to explore Hitler’s mind were “Peer Gynt” by Henrik Ibsen, “Fire and Blood” by Ernest Junger, “Foundations of National Socialism” by Alois Hudal, “Schlieffen” by Hugo Rochs, and “Frederick the Great” (a biography) by Thomas Carlyle. The only book I happened to recognize that Ryback mentioned was “Mein Kampf,” and it turns out I didn’t know as much about it as I thought. (“Mein Kampf” is a three-book series, the last of which was never published.)

After Ryback finishes with Hitler’s suicide, he continues with an afterword and four appendices. In the afterword he discusses the fate of Hitler’s library: Of his nearly 10,000 books, only 1,244 have been recovered. That leaves 8,756 of Hitler’s books either missing, taken or destroyed. Ryback goes on to say that of these 8,756, most were taken by Soviet and American soldiers in the first weeks after Hitler’s suicide, with people from the press and even neighbors taking their share. But a lot of them were destroyed, never to be seen again.

Up until this point in the book I had been chugging along, not really surprised by any of these facts, but not really bored with them either. But when I read that most of Hitler’s library was missing I thought to myself ‘How could one possibly even claim to know a tiny bit about the mind of Hitler when reading only ten percent of his library?’ Nonetheless, considering the huge number of books and the ways in which he analyzed them (marginalia, thumbed pages, how they came into his possession), it seems as though Ryback has a done a rather thorough job of analyzing what Hitler read and how what he read affected his life.