Comedian entertains by making fun of everyone 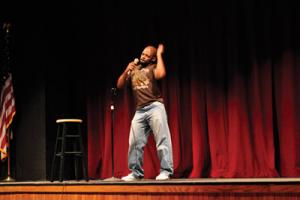 During his performance, Thomas explained why he wanted to become a comedian.

“I wanted to be an actor originally, but then I started doing open mic nights and I loved to make people laugh,” he said.

Since then he has been featured on the “Bob and Tom Show,” a comedy radio program that also airs as an hour-long television show.

Thomas told several jokes that the audience especially enjoyed during his performance at Mercyhurst. These jokes covered topics like dating games, Nintendo, children, the weather and how odd Erie is.

He also told jokes that made fun of many different groups of people.

“No one should take anything personally,” Thomas said. “I make fun of everyone: kids, elderly people, white, black, short, tall. It doesn’t matter because we are all here to laugh and have a good time.”

What made Thomas unique is that he acted out his jokes at times, and toward the end of his show he interacted with Mercyhurst students and made them laugh at themselves.

“It was really cool how he interacted with the audience and made us laugh,” freshman Molly Beichner said. “He was one of the best comedians I have seen this year.”

Junior Nicole Hanks said, “He was hilarious. I laughed a lot and had a great time.”

Thomas ended his performance with advice for the students in the audience.

“Make sure to always have fun no matter what you are doing,” he said.