Bidwell on his back nine 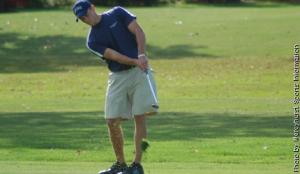 There is the excitement of the next phase of your life, but also the anxiousness and uncertainty of finding a job and having to become a responsible adult.

For anyone on a sports team, the decision has to be made to either continue playing or give up the game that has been a huge part of their entire lives.

When something has been such a major part of your life for so long, it is hard to give it up.

Anyone who plays sports knows it won’t last forever and has to make the decision to quit at some point.

Bidwell has already made this decision and is looking to continue to play golf competitively.

“I definitely want to. Who knows at what level or how much I will get a chance to, but it’s something I want in my life for as long as I can,” Bidwell said.

Bidwell reflects on his four years here with fondness after making some great memories.

“I have seen it as a great experience that I will always remember. I have been able to travel and see many nice golf courses and have played against some guys we may be seeing on the TV someday,” Bidwell, who is a native of Saegertown, Pa., said.

Last year he became the first Mercyhurst golfer to compete at the regional level since 1987, when he played in the NCAA Division II East/Atlantic Regional Tournament.

Bidwell has been a mainstay on the Mercyhurst College golf team for the past four years.

Bidwell leads the team with an average of 75.6 for the season but feels there is still room for improvement.

“I have been struggling with a few things and my scores aren’t as low as I would like them to be, but I enjoy getting things started again,” Bidwell said.

He is looking finish his career here as strongly as possible.

“I just want to play solid for the rest of the season, improve on what I have been working on, and maybe give myself a chance to finish high in our last three tournaments,” the accounting major said.

He looks back to a second round score of 66 in the fall as the highlight of the season so far.

“It was my lowest competitive round ever and got me a second place finish. So that was pretty special for me.”

As graduation nears, Bidwell concludes on his four years here.
“It’s been fun and will be something that I’ll miss when it’s over,” he said.