An Erieite Appetite: Under the Clock 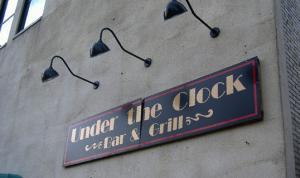 Under the Clock Bar and Grill is located on the corner of State and West 8th Street, a popular meeting place in Erie.

For my birthday, my roommate treated me to dinner at Under the Clock Bar and Grill located at 101 Boston Store on the corner of State and West 8th streets.

For decades, the Boston Store Place has been a popular meeting place in Erie. Once a major shopping center, friends would meet at the Boston Store because its large clock acted as a landmark. Often friends would use the catchphrase, “I’ll meet you under the clock.” In 1931, Under the Clock Bar and Grill was built; however, it has been renovated since its opening.

We drove to Under the Clock on a Monday evening around 6:30 p.m. Surprisingly, the restaurant was very slow for the typical dinner rush. As a result, the host gave us the opportunity to choose our own seat with its high ceilings, hanging light fixtures and dim lighting, Under the Clock has similar qualities to an upscale warehouse.

After we chose a big booth set with water goblets and silverware, our server took our drink order. He recommended a Rose Ginger martini, a mixture of crushed rose petals, ginger, Vodka and 7-Up soda.

We both ordered water, but my roommate was sold on the Rose Ginger martini. She ended up enjoying it so much that she said she was going to attempt to make one at our apartment one day. Visions of crushing dried rose petals crossed my mind, but the sound of my stomach grumbling jolted me back into reality.

Looking over the menu, I decided on starting my meal with a cup of lobster bisque soup. Additionally, my roommate chose to start her meal with a bowl of French onion soup. Under the Clock’s menu is filled with a variety of meal options such as braised beef-short ribs, lobster and shrimp salad, Lake Erie yellow perch and a filet burger.

I chose to order the raspberry salmon salad, a mixture of romaine salad, salmon, cucumbers, tomatoes and raspberry vinaigrette dressing, and my roommate chose the fish and chips.

Our server delivered our soups approximately 10 minutes after we ordered. Both soups were accompanied by a warm dinner roll and butter. Creamy with a lobster garnish, my soup was thick, tasty and filling.

I was very glad I ordered the lobster bisque soup because we had to wait an additional 15 minutes for our dinner entrees to arrive.

“I think they had to go catch the fish,” joked my roommate. We both agreed our stomachs were full by the time our food arrived. We did not understand why our meals took so long to be expedited because there were very few customers eating in the dining room. Since I had a prior scheduled appointment at 8 p.m., I asked for our check upon the arrival of our dinner.

Despite the delay, my salad was extremely fresh and the salmon was tender and marinated with a sweet and tangy raspberry vinaigrette dressing. I was unable to finish it, though, because my stomach was still bursting from the soup.

After we ate our fill, we again waited an additional 10 minutes for our server to bring us the check. Not until he finished refilling the water goblets of other customers did he notice us waiting for our check.

My Under the Clock dining experience lasted over an hour, which in my opinion was too long considering the restaurant was almost completely empty. I really enjoyed my lobster bisque and salad, but I was disappointed with the poor service. Next time I return to Under the Clock, I know I will need to allocate a longer time slot in my daily schedule. 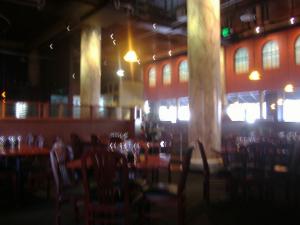 The interior of Under the Clock is decorated is classy and well decorated.