Ana Vidovic to bring wonder to the 'Hurst 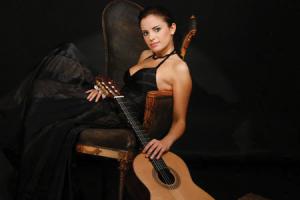 Contributed photoWalker Recital Hall opens its doors to international sound this Friday as it welcomes classical guitarist and worldwide music phenom Ana Vidovic. The performance of soothing guitar music is sure to leave the audience breathless.

The artist herself has such a varied and impressive background that there is little doubt she is one of the elite musicians of the world today. Vidovic hails from Karlovac, Croatia, and began her musical training at the age of five.

By the age of 11, she was giving public concerts around Europe. At age 13, she became the youngest student to attend the National Musical Academy in Zagreb, Croatia, under the tutelage of Istvan Romer.

Soon her outstanding reputation as an international artist in Europe led to an invitation to study at the Peabody Conservatory in Baltimore with Manuel Barrueco. Having graduated from this prestigious institution, Vidovic continues to be an international sensation, possessing an impressive number of musical prizes from competitions worldwide, among them the Albert Augustine International Competition in Bath, England, and the Fernando Sor competition in Rome, Italy.

More than these honors, Vidovic has also appeared with the Zagreb Philharmonic Orchestra, as well as in Croatian films and television, and has recorded multiple CDs. Since taking the stage in 1988, Vidovic has received stunning reviews for her performances, of which there are over 1,000 in places ranging from Paris, London, Rome, Tel Aviv, Warsaw, Budapest, Vienna, Salzburg, Toronto and all over the United States.

With her extensive training and revered public image, Vidovic’s repertoire is sure to include unique arrangements not only of great classical pieces but of more contemporary compositions as well. Her work features intricate and complex guitar techniques as well as beautiful melodic surprises.

The performance is certain to leave a lasting impression on all those who attend. Vidovic will perform in Walker Recital Hall this Friday at 8 p.m. Tickets can be purchased by calling the PAC box office at 814-824-3000.