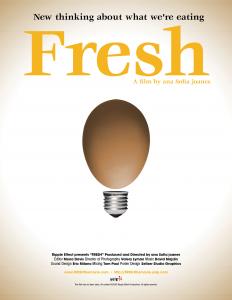 pac.mercyhurst.edu photoAt one point or another, you have been introduced to a description of the Millennial generation: We are labeled as diverse, independent, comfortable-with-technology activists.

Innumerable causes and studies have utilized this last trait, knowing that if they can garner our support, we will be invaluable allies. This is particularly evident in the food industry.

First, there was “Super Size Me” in 2004, a radical experiment which shot down an American view that people could eat as much highly processed, fatty fast foods as they wanted without consequence.

Then “Food, Inc.” came out in 2008, bringing to light the less visible but highly controversial world of meat and vegetable production.

This week’s edition to the Guelcher Film Series, “Fresh,” exists in this same general vein, but presents its own unique spin; those who have seen “Food, Inc.” will notice the differences.

“Fresh” takes on a distinctly more humanitarian spin, and lacks much of the “holier-than-thou” undertone which might exist in other exposé type, call-to-action films.

While the film does make jabs at industrial farming, calling attention to its toll on our soil, health and livestock, its primary focus is on farmers under contract to giant agribusinesses and on the work of ordinary men and women who are making different choices for the sustenance of our earth despite outside pressures.

“Fresh” highlights upon various areas of the country where smaller-sized farms and the farmers who work them are trying different approaches other than contracting with huge agribusinesses.

The first is the Growing Power urban farm in Milwaukee, where Will Allen is turning three acres of industrial wasteland into a nutritional utopia for his neighborhood.

In Virginia’s Shenandoah Valley, Joel Salatin is setting an example by allowing cows, chickens, pigs and natural grasses to flourish and produce without any chemical fertilizer or industrial animal feed.

Throughout the film, one common message exists: Each person, in his or her own way, has a responsibility to care for this world, and that there are viable ways of doing so. It just takes a little initiative.

“Fresh” shows in the D’Angelo Performing Arts Center at 2:15 and 7:15 p.m. today. The Brew and View will begin in the art gallery at 6:30. Tickets are free for Mercyhurst students with their ID.