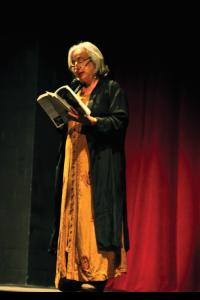 Last Thursday Annie Dawid opened the 2010 Mercyhurst College Literary Festival with readings from her recently published book, “And Darkness Was Under His Feet.”

Dawid began her reading with a story titled “The Solemn Brothers,” which centered on the troubles her family faced in France during World War II.

While her first story captured the nervous emotions felt by her Jewish family during the intense time of war, students seemed to enjoy Dawid’s second reading the most.

Her second story was based on Dawid’s parents and their first time meeting in America.

“I really enjoyed her second story the best because I feel that Dawid was able to capture the scene and personality of the characters well. The whole story was portrayed realistically and it was really effective,” she said.

Dawid finished her reading with a message to the audience about ancestry and keeping a record of family stories.

Director of the Literary Festival Dr. Kenneth Schiff said that he enjoyed the reading immensely.

“It is always a great experience to have the opportunity to hear the voice of the writer and get an understanding of the way in which the author wishes the stories to come across,” he said.

The next morning, Dawid students from Dr. Greg Brown’s Intro to Creative Writing clas about writing and the process of creating a fictional character. While lecturing the class on character development in fiction writing, Dawid kept the class entertained by incorporating her own life stories and writing experiences into the lesson.

Andrew Hudgins will continue the festival with his poetry reading on Thursday in Taylor Little Theatre at 8:15 p.m.

Hudgins, who has had many volumes of poetry published, including “Ecstatic in the Poison” and “After the Lost War,” will be reading selections from his works and will be holding a book signing after the event.

The festival will close Thursday, April 29, at 8:15 in the Taylor Little Theatre with the unveiling of the 2010 edition of the Lumen, Mercyhurst College’s Literary Arts Magazine. Both events are free and open to the public.