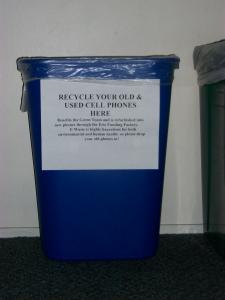 Dispose of your e-waste in these bins located in the academic buildings around campus.

Perhaps you have noticed the labeled collection bins for old or used cell phones that are located in the hallways of Old Main, Preston and the first floors of Zurn and Hirt.

These bins have been placed around campus by the Green Team in an effort to get students to donate their used cell phones to the Erie Funding Factory.

The Funding Factory refurbishes old and used cell phones, and allots points for each phone collected that can be redeemed for prizes. Aside from trying to raise funds, the Green Team hopes to make students aware of the hazards of improper disposal of e-waste.

E-waste is the term applied to old and used electronics that are thrown away. Cell phone coatings are often made of lead and their batteries were originally composed of nickel and cadmium, “a human carcinogen that causes lung and liver damage” (Earth911.com).

Newer batteries often contain potentially explosive lithium. Cell phones are not the only electronic devices that are hazardous when not recycled properly; TVs, computers, iPods, etc., all contain chemicals that are toxic if allowed to dissipate into the air or leech into the soil. Some 70 percent of the heavy metals in landfills come from electrical equipment waste.

On top of the fact that e-waste greatly pollutes the planet, it is being exported to already impoverished areas of the globe. While America is a leading producer of e-waste, less than 20 percent of which is recycled, 50 to 80 percent of this e-waste finds its way to developing countries. The reason for this is due to the money that can be made from computer stripping, which is the process by which reusable materials are removed from old electronics and re-used. When this process is not regulated properly, highly toxic chemicals used to strip the machines are dumped into the soil and dangerous chemicals are released from the electronics being stripped. The people employed to perform this task are exposed to a bombardment of harmful substances for low wages, so companies such as Apple, Toshiba, etc., can make a higher profit.

The proper disposal of old and used electronics is imperative to helping elevate and eventually end the problem of e-waste. When an electronic has reached the end of its usable life, it should be returned to the manufacturer or given to a company, such as The Funding Factory or RCR&R, which will make sure the product is not left to leech its toxic into the biosphere.

Further information can be found on-line at Greenpeace.org, Earth911.com, ewasteguide.info, or simply by Googling e-waste. In the interim, if any student or faculty member has an old cell phone that is no longer in use, please drop it in one of the appropriate recycling bins located around campus.