There are times where it is difficult to find the precise topic I want to discuss on a weekly basis. Sometimes, I have got to dig through the entire week’s news material in order to find something intriguing enough that I can write an article about it. 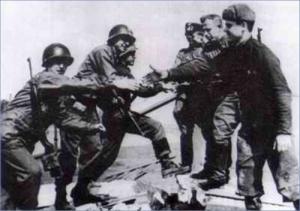 Google Images: The handshake at ElbeThankfully, this process usually unearths a wonderful little gem that I can show all of you next Wednesday. This week was one of those weeks, and I am glad for it.

Thanks to the Reuters news network, I stumbled across an article reading, “U.S. President Barack Obama and Russian counterpart Dmitry Medvedev said on Sunday their nations need the spirit of mutual trust they enjoyed during World War II to build true partnership.”

The article references the handshake at the Elbe, where American and Soviet troops met just days before the defeat of Nazi Germany, as the specific type of cooperation that is required between the two countries today.

Whereas the American and Soviet troops did indeed meet at the Elbe, and whereas there was a mutual enemy between the two forces, it seems that President Obama is overlooking a significant portion of the last century in order to find an example of cooperation between the two nations. What is being overlooked by the American administration is the nearly 50 years during which the two countries were diametrically opposed to one another to the degree that both governments were more comfortable with the idea of Mutually Assured Destruction than defeat.

While the handshake at the Elbe was an historical event of some significance, the “spirit of the Elbe” referred to by Presidents Obama and Medvedev is not poignant enough to base new relations on–much as the Christmas Truce between Allied and German forces during World War I did not endear the French and British nations to the German people in the lead-up to World War II.

It would be a mistake for the Obama administration to have relations with Russia in the same way that President Roosevelt had relations with Uncle Josef Stalin. Papa Putin is not America’s friend, and this should be remembered carefully, lest we endear an enemy of the state to the American people.