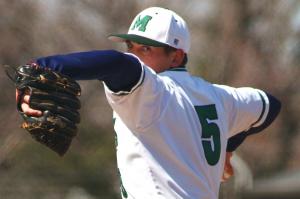 Earning himself a home run was freshman first baseman Bill “Avatar” Grestenslager. He cranked the ball so far past the right-field fence that it hit the roof of the Mercyhurst Ice Rink.

“We call him ‘Avatar’ because he is about 6 feet, 7 inches He has the ideal frame for playing first base,” sophomore Jaasiel Rivera said.

Sophomore Ethan Santora had the biggest impact at the plate, hitting six for nine, scoring two runs and driving in three RBIs.
Junior pitcher Nick Gillung, from Punxsutawney, Pa., was a major factor in the win for the Lakers, pitching six innings and allowing one earned run on eight hits while striking out four and walking one.

Head coach Joe Spano congratulated the team by saying it was a good win. At the same time, he warned the team that the next few games will not be easy.

“Mental preparation is going to be a big factor in our success if we expect to win,” Spano said.

This victory launched the Lakers into the third seed at the Pennsylvania State Athletic Conference West division tournament. They will play Kutztown University on Wednesday, April 28, in Johnstown.

We will go over scouting reports and practice executing bunts and hit-and-runs. We will also work on our defense to prepare for the tournament,” Rivera said.

The winner of the eight-team tournament will receive an automatic bid to the NCAA Atlantic Regional Tournament.

The Lakers are doing well, but tough competition remains on the rest of their schedule.

Despite a tough schedule, the Lakers have confidence in their ability to win.

“It’s going to be a grind like last year, but I see us coming [out] on top,” Rivera said.