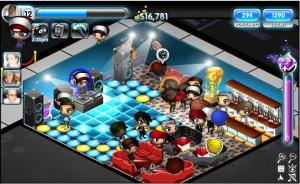 Cons: Can be Occasionally tedious

Have you ever wanted to run your own nightclub, bust out tunes as a DJ or run a bar? Well, Nightclub City on Facebook is the game for you.

In Nightclub City, you run your own night club. You play music that folks can dance to, you serve drinks and you kick out trouble makers with your bouncer. The point of the game is to make money, expand your club and become the most popular club in the game.

This game has got to be the best I have seen on Facebook by far.

While the graphics are not the best, they are good. They have some really cool stuff such as the night club floor that lights up occasionally and a disco ball effect that can appear as well.

Also, the music is great. They play music that you can actually buy on iTunes if you like it. While playing the game I found myself grooving to the music. It feels like you literally have your own little nightclub, although just a virtual one.

If there is only one downside to this game is that it can be a bit tedious. In trying to be as much like a real night club as possible, you find yourself, at times, doing three things at once. You need to re-supply the drinks, remove trouble makers and keep your guests happy. This is not too much of a major deal but you will sometimes be saying to yourself, “Jeez another fight! Can’t they just take a break?”

All in all, this is a great game, though. I personally love it. It is just plain fun, the graphics are cool and the music is great.

The only thing wrong with the game is that you sometimes feel like you have to be an octopus but this does not weigh heavily against the rest of the game. Definitely a five out of five.

To talk about this game and others check out Mercyhurst Game Geeks. Also to see my video blog, the game I made and all my other articles, go to charleswheaton.blogspot.com.