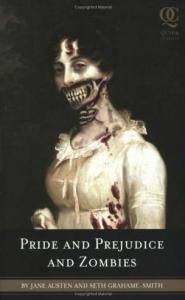 The Book Club chose “Pride and Prejudice and Zombies” for its first reading.

Mercyhurst College has welcomed a new Recognized Student Club and Organization to the campus community.

Sophomore Chelsea Schermerhorn and freshmen Miranda Flores and Braiden Ross wanted to start a club for leisurely reading, so they formed a Mercyhurst Book Club, which was officially registered at the end of winter term.

“I’m hoping to see less stress involving class reading among students and an overall sense of fun and cohesive involvement in reading for pleasure,” said Schermerhorn, who acts as the club’s publicist.

“I would also like for the book club to contribute to the literary festival next year in any way it can and help to bring writers and authors on campus. I have high expectations for the Mercyhurst Book Club and I believe it will be a great addition to the campus and the literary environment of the college.”

These are high hopes for a 13-member club that has met only once so far. Despite the challenges ahead of them, the other members seem equally optimistic.

“I’m hoping to see the book club as a closer social circle,”Club president and freshman Katie Felong said. “Maybe add some snacks, a place to be a haven for book junkies, where we can discuss our favorite books and least favorite books, as well as talk about the book we’ve read for club.”

The club also brainstormed a list of possible reading choices, including everything from classics such as “The Rime of the Ancient Mariner” by Samuel Taylor Coleridge to more contemporary literature such as “The Graveyard Book” by Neil Gaiman. As a club for “leisurely reading,” the book club aims to choose a wide variety of books and will not focus on any genre, although members have stated a preference for fiction. The book choices should also interest the majority of members without adding too much to their workload of class reading.

For its first reading, the book club voted for “Pride and Prejudice and Zombies,” a quirky retelling of the Jane Austen classic by Seth Grahame-Smith. Schermerhorn explained that the club made the choice “primarily for the fun nature (of the book), as the year is winding down.”

The book club will hold its next meeting on May 12 at 6:30 PM in the main lobby of Baldwin Hall, where students will discuss the first book and possibly watch the 2005 film “Pride and Prejudice.” Felong encourages anyone who is interested to join the club. For more information, e-mail her at kfelon00@mercyhurst.edu.