Your Weekly Report from Dungarvan, Ireland: Farewell and go mbeirimid beo ag an am seo arís! 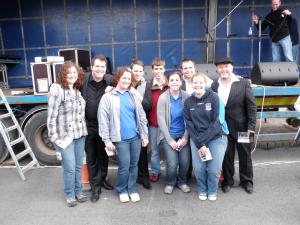 Students with band members from the High Kings.

Following our return from the West, on Monday we took a trip out East, to Waterford city.

Before we made it to the city, we had a traditional Irish breakfast at St. Augustine’s College thanks to Principal Joe Moynihan. The breakfast was delicious and included porridge, bacon, sausage, scrambled eggs and black pudding.

St. Augustine’s has a great connection with Mercyhurst. They send a number of their students there to further their education.

Then we went to the Waterford Heritage Museum, where Waterford Crystal was previously located. After the museum we took a tour through the replica of the Dunbrody, which is a 19th-century sailing ship immigrants used to travel to the U.S. on during the potato famine.

Once we stepped off the ship, we headed to another college in Waterford and had dinner there. Then our last stop was at the Kennedy Homestead, where we got a tour from a relative of JFK.

This past weekend in Dungarvan was their annual music festival. Every night, Thursday through Sunday, the local pubs had live music. The music ranged from traditional Irish music to bands that played covers of U.S. bands.

Also included in the festival was an award-winning play “Sive,” which was free for Mercyhurst students. The festival came to an end by the High Kings playing an outdoor concert. This band was very good, they are definitely worth listening to. They are touring in Erie, sometime in November.

After the concert was over, a bunch of us bought CDs, got autographs and took pictures with the band.

When I first boarded the bus at Mercyhurst to take us to the airport to fly to Ireland, I boarded a bus of strangers. I knew no other Mercyhurst students on the trip.

As I prepare to leave Ireland, I look back at the incredible relationships myself and many others have formed. We have not only become great friends with each other, but also with members of the community.

I can’t emphasize enough the close relations we have with the people of Ireland. They are the type of relationships that only strengthen with time. I have learned so much academically but even more about life on this trip. My horizon has been forever expanded because of this experience.

We have less than two weeks left in Ireland, so this will be my last Merciad article. I would like to emphasize our utmost appreciation for this amazing experience. We are forever in debt to Tom Keith, Damien and Natanya Geoghegan, Joe O’Flaherty, Joe Moynihan and so many others who made this study abroad experience the best part of mine and others’ college careers.

May we all be alive at such a time again!