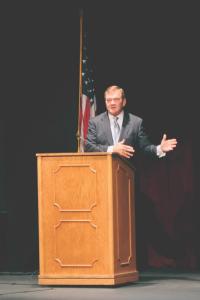 Pennsylvania’s 43rd governor and our nation’s first secretary of Homeland Security spoke at Mercyhurst College about issues such as terrorism, Guantanamo Bay and immigration.

Ridge began the presentation by briefly talking about the different positions he has served for the government. He has never lost an election, and “I think it’s time to retire before I’m defeated,” he said.

After speaking about his career, Ridge spoke about issues that America is facing. He spoke about what the world was like before Sept. 11, 2001, and how it changed since then.

He spoke about how he thinks the future will be different as well.

“We are going to depend on the world more than ever before,” Ridge said.

The United States needs to depend on other countries both economically and militarily, he said.

He then went on to discuss the current War on Terror.

“Terrorism is a tactic,” Ridge said. “The War on Terror is somewhat misnamed. We are really at war against a belief system.”

Ridge told the audience ways in which he thinks the United States should fight this belief system.

He said the United States should not preach to the Muslims, instead focusing on moving people away from this way of thinking.

The message should be, “People within your religion have murdered more people in your co-religion than not,” Ridge said.

Ridge went on to tell the audience that every policy America sets and every way they deal with others should adhere to its own belief system.

He said that America is a product, and “our brand is predicated on our value system.”

Our brand should be “consistent with the Constitution, Bill of Rights and the due process system. We can’t abandon that,” Ridge said.

America is not being consistent with its brand with the issue of Guantanamo Bay because people are entitled to due process and a right to an appeal. These rights are not granted at Guantanamo Bay, according to Ridge.

Gamble asked Ridge what his opinion is on the Arizona Senate Bill 1070, the recent immigration legislation passed in Arizona.

“I don’t like it,” Ridge said in response to Gamble’s question.

Ridge talked about how he thinks the immigration situation should be handled.

Ridge proposed legitimizing the presence of illegal immigrants after they pay a fine. He then suggested that these legitimized immigrants should be put into a database, and firms should hire from this database.

Ridge said there should be “horrific fines for people who hire illegally.”

Senior Matt Visco commented on what he thought about Ridge’s presentation. “To be honest, I loved it,” he said.

“It was more of a conversation or intellectual discourse then a real speech. Governor Ridge’s analysis of the threats posed to the U.S. are both concise and clear. He had this no-nonsense attitude, probably derived from the fact that he will never run again, of discussing what he thought was good or bad policy. It is a shame he won’t be going back to public service, as his presence is surely missed.”