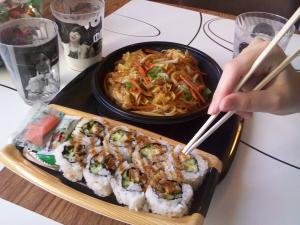 Faye Clark photoAs a college student newly thrown into the world of having to shop and pay for my own meals, finding something filling for a good price has become a job itself.

After my freshman year, I returned home to Columbus, Ohio, where I was spoiled by all the sushi, tea and general good eats I could possibly want. Since returning to Erie, I have made it my mission to find places where I could feed my cravings for foreign food while keeping enough money in the bank for general expenses that come up when you live on your own.

My roommates and I decided we would try out several different grocery stores to see which had the best prices and selections, and one of the stops on that list was Wegman’s.

My first thought when I drove into the parking lot was that it would be full of pretentious buyers of organic produce, and everything would be expensive beyond belief. I was pleasantly proven wrong. Wegman’s was a normal grocery store filled with normal people and the kind of food I actually wanted, including a sushi bar.

We settled on eel rolls, a plate of dumplings and lo mein. The cost was $10.49 and fed all of us easily. Eight rolls of sushi doesn’t look like much, but it is extremely filling, and we had the dumplings and vegetable lo mein to eat, too.

For people who haven’t had sushi before but are thinking about trying it, the eel roll might be a good place to start. The way the eel is cooked makes it salty and it tastes — yes — a little like chicken. The avocado and cucumber, which are wrapped in rice and seaweed, also add some flavor. The tastes blend together quite well.

The vegetable lo mein and dumplings were the same familiar meals you find in Chinese take out, but the dumplings were absolutely superb, especially for being from a supermarket café.

Wegman’s Market Café has more to offer than just sushi. In the same area near the front of the store they have a classic submarine stand, a pizza place, a coffee shop and a salad bar to feed the rest of your cravings. I know it’s hard to think of a grocery store as five-star dining, but the quality of meal for the price we paid will certainly keep us coming back for more.