Foley began Mercyhurst’s yearlong observance titled “The Flourishing Child” when he spoke at the college on Wednesday, Sept. 8, and he joined members of the Mercyhurst community in celebrating the Mass of the Holy Spirit on Thursday, Sept. 9. 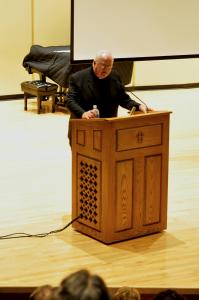 “Father John Foley is a visionary,” freshman Greg Weatherly said. “He cares about underprivileged Americans, and he helps them by giving them job experience and education.”

Students at the Cristo Rey Schools don’t follow the same curriculum of other schools in the nation. They attend classes four days a week, and one day out of the week they go to work at large companies.

With this method of educating, the students not only get a high school education, but they also learn about office work, hygiene, how to dress, eye contact, a firm handshake and much more.

“It [the additional lessons] is not common sense if you didn’t ever do it,” Foley said.

Working one day out of the week is not just a lesson but also a way that the students pay for their tuition to attend Cristo Rey. The jobs offset the $9,000 tuition costs.

School is in session 10 months out of the year and starts early in the day and ends late at night. There are 6,000 students in the 24 schools and more than 2,200 graduates.

All of these schools are Catholic and have a religious sponsor such as the Jesuits or the Sisters of Mercy. The dropout rate within the network is 1 percent. The schools system’s goal is that every student finishes high school and graduates from college.

“No one ever expected this to happen,” Foley said. “We had no idea we were creating something totally new.”

Junior Amanda Chance said, “Foley’s work is truly inspiring and it’s amazing to see what he was able to do to change the lives of so many underprivileged youth.”

Foley wrapped up his presentation by saying “it is the Lord at work,” and we are “saving the Lord’s people.”

The Flourishing Child presentations aim to look at issues affecting children and youth of today’s society and ways to improve their lives.

The next Flourishing Child event takes place on Wednesday, Sept. 22, at 7:30 p.m. in Walker Recital Hall where Dr. Jamie Ostrov will discuss “The Development of Forms and Functions of Aggression.”