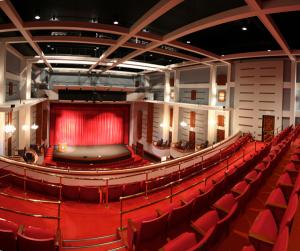 Photo by Ethan Magoc: The Mary D’Angelo Performing Arts Center is celebrating its 15th anniversary this season.The history of Mercyhurst College is a multi-faceted entity; it can be felt through our affinity with the Sisters of Mercy, in the development of our curriculum and sports, to the evolution from female to coed and the widening expanse of our campus.

This year, the college’s history is keenly felt through the arts, as the Mercyhurst Performing Arts Center (PAC) celebrates its 15th anniversary.

“It has been a very long journey,” says PAC director Michael Fuhrman, “and there are great moments to remember.”

Fuhrman describes the PAC as having mostly classical beginnings, although it did show some films and Irish music, which celebrated the roots and spirit of the college, while also being fun and traditional. Eventually, the focus moved away from a purely traditional repertoire in order to bring in more of the public.

Fuhrman says this was the primary reason the PAC was built in the first place – so that the college and the community could connect.

But what does this mean for the students, the PAC’s primary audience? Fuhrman describes the center as an “opportunity for students to see who they are and what excites (them) about life.”

The center’s role is to bring the world and all its cultures to the college; it is a great part of students’ educational experience.

Aside from being a superior venue for students to experience the arts, the PAC is also one of the largest work study employers on campus, providing jobs for as many as 100 students. As ushers, these students attend the events; “they’re forced to experience things they’ve never experienced before,” Fuhrman says.

The PAC is also actively reaching out to faculty, encouraging them to use performances as supplements to the classroom. This is a topic of particular importance; Fuhrman says that “the center is not only a tool that brings recognition on a national level, but also a vehicle to transform the student.”

This year is testament to this goal. The season opens with Wynton Marsalis, a nine-time Grammy Award winner and arguably the biggest name in international jazz.

In November, the PAC receives the Ukulele Orchestra of Great Britain, a group which Fuhrman says is “just great fun.” The group covers everything from Nirvana to The Who, and has a type of “underground following.” But the extraordinary point is that they’re only playing three shows – here for the first time, Toronto, and Carnegie Hall, which sold out in two days.

In March is Complexions, a group which combines athletics, movement and dance in a way that is utterly spellbinding. In May arrives the sensational Spanish Harlem Orchestra; this event is especially unique in that a ticket includes a pre-performance Gala, featuring Hispanic and Latin food, Latino music, and the PAC lobby lavishly decorated to the nines. And these are just the highlights.

What’s coming up in the future?

Fuhrman says they want to continue “to bring the very best artists from around the world,” and also structure greater relationships with the faculty so students can see what’s available.

He says also, that the PAC would like to tap into the Mercyhurst Student Government (MSG); 14-15 years ago, a Beatles cover band performed homecoming weekend including the football game. Fuhrman called it a win-win situation, combining sports and entertainment, and allowing parents and students to enjoy and experience both sides of the community.

For 15 years, the PAC has continued to evolve and prosper, providing unforgettable experiences for students, faculty and the Erie community. The excitement, dedication and passion of everyone involved, from the staff in the PAC offices to the performers themselves, is infectious and cannot be adequately described in words.