Students get involved with help of RSCO, Service Fair

Within the Herrmann Student Union, 60 RSCOs and 27 organizations for service opportunities set up tables to inform students about various opportunities for involvement on campus and volunteer work. 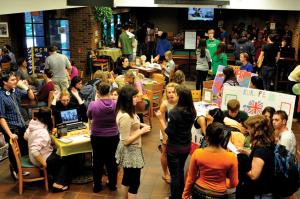 Tyler Stauffer photo: Students spoke with members of various clubs and representatives from local charities on Wednesday, Sept. 15.
The Center for Student Engagement and Leadership Development teamed up with Service Learning to host the fair.

This was the first year the RSCO Fair and the Service Fair took place simultaneously.

Director of Service Learning Colin Hurley explained why the fairs were combined.

“We’re able to introduce students to service opportunities and allow service clubs to network,” he said.

Sarah Allen, assistant director of the Center for Student Engagement and Leadership Development, said she estimated the networking opportunities attracted 300 to 450 students.

“We hope students can connect and get involved this year,” she said.

In that regard, the RSCO and Service Fair served its purpose well.
Several newer clubs, such as the Anime Club and Book Club, reported a doubling of membership within the first hour of the event.

Sophomore Judy Golden, who worked at the Anime Club table, said, “We have more people signed up this year than we had in the club last year.”

Likewise, sophomore Amanda Stafford, treasurer of the Book Club, said, “We’ve gained many new members through the RSCO fair.”
Stafford used the RSCO fair to talk to prospective members and direct them to the club’s new Facebook page.

Students looking for ways to get involved on campus filled the Student Union for a chance to meet with members of various clubs and representatives of local charities.

Freshman Kahla Wilson said, “I came to find out how to get more involved and look for volunteer opportunities.”

Due to the large amount of students who attended the fair and the number of clubs represented, the major complaint of the day was the lack of space.

Overall students looking for ways to get involved and clubs seeking members considered the RSCO and Service Fair to be a success.