We The Kings and J Cole will rock Penn State Behrend in a double-headlining concert during Homecoming Week, according to the Lion Entertainment Board (LEB).

The two were selected by LEB as part of a joint effort with the Homecoming committee. They will appear in a double concert on Oct. 17. 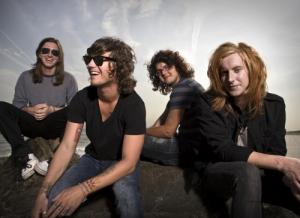 Contributed photo: We The Kings will perform at Penn State Behrend along with J Cole as part of the school’s Homecoming Week.The two performances were chosen, says LEB President Caleb Rodgers, because of the broad appeal they have.

“The two together really apply to a broad spectrum of music tastes,” he said. “We The Kings offers that traditional pop and rock type of feel, while J Cole has a bunch of different things. He’s done stuff with auto tuners, R & B, hip hop, rap – he incorporates a lot of different styles into his sound.”

J Cole will be the first headlining act at Behrend within the hip hop or rap genre.

The two together will be paid for out of the LEB special events budget, and cost the group $20,000.

We The Kings and J Cole come as part of the Pringles XTreme Campus Tour, which will take the two performances to 18 campuses between Sept. 29 and Oct. 29. Behrend will be the 11th stop on their trip.

The tour will also set up food and concession stands as well as prize booths. Giveaways both big and small will be in those tents for students to win.

Despite having such a large concert in fall, Rodgers says that it will not affect the annual spring concert.

For that concert, the Concert Committee will release a student survey which will gage interest in various types of music for the spring concert.

“We want to get a ton of student involvement,” said Rodgers. “We’re hoping to really get the survey out there and get a lot of responses, so that we get the most accurate choice possible.”

We The Kings is a Florida pop-rock quartet which has sold over 2 million tracks and had over 56 million plays on MySpace, according to a release by the band. They have toured across the nation and appeared on Jimmy Kimmel Live and MTV’s TRL and Spring Break 2008. They also headlined in the 2009 Vans Warped Tour.

North Carolina rapper and hip hop artist J. Cole (born Jermaine Cole) has been composing his own songs since the age of 15. His influences include Tupac Shakur, Nas and Outkast.

The two bands will have even set times, and will headline together.

GU readies for weekend of giving

Gannon University hopes to build on its numbers from 2009 as it prepares for GIVE (Gannon’s Invitation to Volunteer Everywhere) Day on Saturday.

Gannon University’s annual GIVE Day will be held Saturday.

GIVE Day is a community service day in which university students, faculty and staff give up their morning to volunteer at different places and help local communities and organizations.

The upcoming event will be the 14th time the university has showcased this day. This year, participants will be going to new locations to serve the community, Arlene Montevecchio, director of the Center for Social Concerns, said.

“We have several projects this year that are related to Gannon’s neighborhood initiative, Erie- GAINS,” she said.

One of those projects is the kickoff of the Gridley Park project, and Gannon will have 50 students and 10 to 20 faculty, staff and alumni at the park.

“We’re also participating in the Fair on the Square, which is a health fair, and so a number of the health science students will be helping over there,” she said.

Montevecchio said she is excited to see all the people who come out to serve one purpose.

More than 1,000 students, faculty and staff all contributed to giving a helping hand in the community in 2009. Junior Everett Wensel participated last year and said he plans to join Saturday’s service opportunity.

“I feel like every GU student should take part in GIVE Day at least once,” the accounting major said. “I believe it is a good thing to take a little bit of time from our lives to give back to the community.”

Wensel also said he would recommend going to GIVE day to any new student or freshman. “Students are not only helping out the community,” he said, “but it also can be an opportunity for the freshmen to possibly get to better know each other.”