Being pushed on the playground, refusing to share toys and stealing snacks from another are all common scenarios children experience.

On Wednesday, Sept. 22, Dr. Jamie Ostrov explained his study on the “Flourishing Child” and types of aggression experienced through children to the Mercyhurst College Community.

As an associate professor of psychology and director of the Social Development Laboratory at the University of Buffalo (UB), Ostrov and his team conducted several studies to analyze this trend and ways to prevent it. 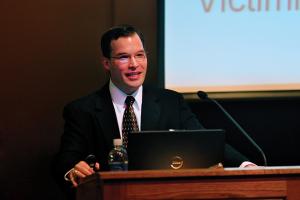 The study’s main goal was to observe and improve the quality of life.

In order to resolve the aggression one needs to intervene, which is where the UB Early Childhood Friendship Project comes in. It first took a gender-balanced approach to see if different genders display different outcomes.

There was a substantial difference in terms of relational aggression. This refers to using removal of the relationship as means of harm in such acts as spreading gossip or social exclusion.

“The study of relational aggression is a much understudied topic, which is why I was interested in this study. There seems to be an absence of this type of work in literature,” Ostrov said.

It was found that girls have much more relational aggression than boys do. Even so, physical aggression is much more prevalent in boys rather than girls.

Another aspect of the study was media violence compared with relational and physical aggression. Children were studied that watched television with violent media exposure such as “Star Wars” compared to those who viewed education media exposure such as PBS.
Results found that children that watched programs such as “Arthur” on PBS showed signs of relational aggression.

Further research concurred that children younger than the demographic ages of seven to nine couldn’t comprehend the end lessons and only picked up on the initial problems of the storyline.

Sophomore Adam Burks was surprised by all of the outcomes from the study.

“Dr. Ostrov’s presentation was very informative and enjoyable,” he said. “The study’s results were unexpected and very relevant to everyday life.”

It was found that once this aggressive behavior is spotted one should intervene.

Ostrov used a tactic called reinforcement of behavior. This was a six-week program where puppets were used to identify good friendship skills and made sure comprehension is achieved.

“The most interesting thing I found was that the children that are aggressive become victims, and the victims also become the aggressors,” Ostrov said.

The event ended with questions taken by the audience, and there seemed to be very positive feedback from the crowd.

“Dr. Ostrov was very excited and passionate about his work and findings, so it was easy to stay engaged in the lecture, not to mention some of the correlations that I definitely did not expect,” sophomore Lauren Fraser said.

Ostrov’s studies will not conclude with the “Flourishing Child.” He plans on looking at the link of biological process and aggressive behavior in the future.

Dr. Elizabeth Dohrn will be the next speaker in the “Flourishing Child” series. Her discussion will take place on Thursday, Sept. 30, in Walker Recital Hall.