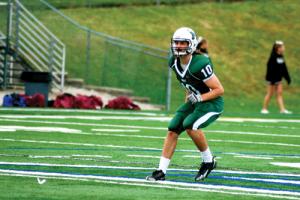 Bryant and Connor Kimball grew up around football.

Their father coached it, and it came natural to them.

This weekend, these young men will be defending their schools against one another, for the last time; Connor plays for Gannon and Bryant plays for Mercyhurst.

Both are sons of Mercyhurst’s own athletic director, Joe Kimball.

However, Kimball enters this weekend not as a coach, but as a father and athletic director.

Being an athletic director is only one of the hats Kimball wears, but it’s not always the one that comes first.

“You’re always a dad and want nothing but the best for your kids,” Kimball said. “The father hat always prevails.”

When it comes to his kids, Kim- ball wants nothing more than for both to succeed. But when it comes to a specific school, he wants Mercyhurst to win.

“I want Connor and Bryant to both have great games defensively, but for Mercyhurst to win the game.”

“It’s tough knowing that one of your sons is playing and you can’t be there,” Kimball said. “My wife goes in one direction and I go in another, so we are (both) some- where in the state of Pennsylvania watching football.”

This rivalry is no stranger to Bryant and his brother Connor.
Both have formed a little rivalry of their own the past couple of years playing against one another.

Mercyhurst has an overall record of 3-1, 1-0 in the west division of the Pennsylvania State Athletic Conference (PSAC).

The Lakers are coming off a dynamic win against Lock Haven University this past Homecoming Weekend.

The Lakers scored 41 points against the Eagles, setting the tone for this week’s contest against Gannon.

“Last weekend was a big win,” Bryant said. “We struggled a little bit in the first half, so we will take those mistakes and learn from them.”

The Golden Knights enter this weekend with an overall record of 2-2, 0-1 in the PSAC’s west divi- sion .

This past weekend they lost to another local rival, Edinboro University, 13-0, and are looking to bounce back this week as they host the Lakers.

The Laker defense is a strong point of the team this year.
They have 12 interceptions for a combined 101 yards, holding opponents to an average of 281 yards of total offense per game. The Golden Knights have a pretty good running game, averaging 135.5 yards per game.

Still, this should be no match for the Laker run defense, as they have held opponents to an average of 72.2 yards per game and, forced six fumbles.

For this weekend to be a success, the Mercyhurst pass defense needs improved.

The Lakers have only been able to hold opponents to an average of 208.8 yards per game in the air.

This number proves to be high among other members of the PSAC’s west division.

The Golden Knights pass defense hasn’t been much better, holding opponents to an average of 212.2 yards per game.

As with any rivalry, statistics don’t count. Whoever has the most heart and passion will prevail.

The next showdown between these rivals will begin on Saturday, at 12 p.m. at Gannon University Field.