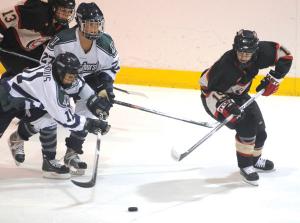 Scoot Williams photo: Vicki Bendus (11) and the rest of the women’s hockey team kicked off its regular season last weekend with home wins of 9-1 and 6-1 against St. Cloud State.My previous post at The Merciad was covering our men’s ice hockey team, a job that I relinquished to take this one. One thing, though, has not changed, and that’s my passion to write with about hockey.

Would it be too much to assume that Mercyhurst has been awaiting the arrival of hockey season?

The first home game was a women’s game against Wilfrid Laurier, an impressive win for the No. 3 ranked Lakers.

This year is very important and exciting for the women’s program, as they welcome back two-time gold medalist Meghan Agosta for her senior season with Mercyhurst.

The team has also brought back many familiar names as well as some new freshmen who are eager to get things rolling at the ‘Hurst, especially in a year when Erie will be hosting the NCAA Women’s Frozen Four.

When asked about making this year’s team, freshman Christie Cicero said it’s “exciting and nerve-wracking at the same time. Coming to a team who is on a completely different level of play is so exciting.”

“As a freshman, I couldn’t ask for anything better. I’m learning from the best, and the Frozen Four will be an amazing experience in our home town here. Mercyhurst women’s hockey is a big time thing,” Cicero said.

This is true, knowing that, Erie will indeed rally around its hometown Lakers in hopes that the Mercyhurst women make it to the Frozen Four this coming this March.

It’s possibly one of the biggest events to make it within the Erie city limits, and the college is eager to also play host to such an event. In any case, the women’s hockey team is poised to make a run at the title, proven this past weekend by their sweep of St. Cloud State University.

The men’s team also looks to improve upon last year and bring a back that hockey state of mind to the Mercyhurst campus. The Lakers (unofficially) won the first game of their season, downing the No.4 University of Michigan Wolverines 5-4 in a shootout, after coming back from a 4-0 deficit.

The game, if anything, was a statement to the fans- Mercyhurst is ready to take on Atlantic Hockey.

Going up against old foes and new faces is going to prove very eventful for the Lakers and their fans, as the men’s team brings back Phil Ginand and several new freshmen (including goalie Jordan Tibbett, who stood against the Michigan shootout).

It was an impressive win all-around, and the Lakers definitely have an exciting lineup to bring to the ice this year.

Between the men and women of Mercyhurst, one thing is crystal clear about it all: hockey is back at the ‘Hurst, and it’s going to be a wild ride.