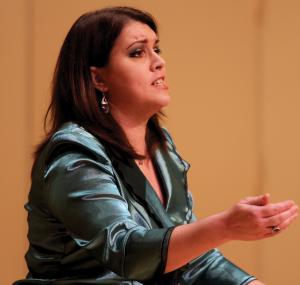 She performed during Student Forum, which is held weekly and is an attendance requirement for music majors.

Usually, Student Forum is a time for student performance, but occasionally a guest is brought in to impart valuable information about the music industry and musical careers.

Past guests have included Maestro Daniel Meyer of the Erie Philharmonic, and Rusted Root, an African drumming circle.
Sederburg’s performance-lecture was titled “Living With Bipolar Disease” and is part of the music department’s focus for the year on mental wellness, while paralleling the college’s year-long theme of the Flourishing Child.

Sederburg opened with a segment of a dramatic reading that detailed her own personal experiences suffering from bipolar disorder. Interspersed between the readings were musical selections that embodied the emotions described.

At the end of the recital portion of the program, Sederburg presented information on bipolar disorder in a question and answer format, using her own personal experiences to explain the truth about the disorder.

She answered questions such as “What is bipolar disorder?” and “What was the first indication you experienced that you had the disorder?”

Sederburg first saw signs of bipolar disorder during her junior year of high school, but was not officially diagnosed with the disorder until age 29.

She stressed to the audience that the most important thing to do if diagnosed with this disease is to take the prescribed medications and attend therapy.

“Bipolar is a disease that is with you for life, and teaches you without a doubt that you have no control over your emotions,” Sederburg said.

She also stressed the importance of spirituality in managing her disorder.

“My hope of the resurrection of Jesus Christ has held me back from the deepest despair,” she said.

On a musical level, Sederburg was both powerful and expressive, reaching her audience on an emotional level through her singing.

Senior music student Mary Spinelli said, “Her story of recovery is so beautiful, and she expresses herself so well within the musical pieces. Her story is heartbreaking.”

Sederburg is an Erie native. She graduated from Mercyhurst in 1992 with a bachelor’s degree in Music Education and Piano. She is also a graduate of the opera program at Carnegie Mellon University, as well as a former apprentice with the Pittsburgh Opera.

As an opera singer, she performed with After Dinner Opera, Opera North, the Opera Theater of Lucca, the Erie Opera Theater and the American Singers Opera Project.

Now, she is the founding Director of Undercroft Opera in Pittsburgh. She lives in Pittsburgh with her husband Neil. She maintains that her faith and taking medication are the main factors that have allowed her to lead such a full and successful life while having bipolar disorder.