Melman gave his presentation, titled “Extinction by Design: Can humans survive the evolutionary engineering,” on Thursday.

During his presentation, Melman explained transhumanism, an international movement that calls for a scientific approach to fix mental and physical flaws.

The goal of this movement is to create a state of pure health. 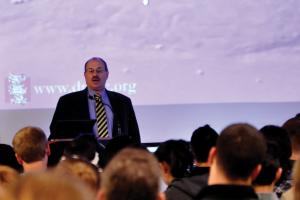 Scientists have been studying genetic engineering for many years, which is a part of transhumanism.

Scientists have already genetically engineered produce, which according to Melman, makes up 70 percent of all food sold in the U.S.

Not all genetically engineered experiments are successes. Melman gave examples of different genetic experiments gone wrong, such as cloning Dolly, a sheep.

Melman then described how humans can be affected by genetic engineering. According to Melman, there are online companies that will test a person’s genes for different traits and diseases.

“While these tests can’t be validated completely, the idea of using a credit card and the World Wide Web to get gene testing done is astounding,” he said.

He described a Web site that matches a person to the right partner based on genes, which is essentially genetic love matches.

If a person believes “playing God” is wrong, “then those who cure with medicines are playing God,” Melman said.

Melman explained how some form of genetic engineering exists through medicine and how the Human Genome Project, which is now ended, helped to determine how many and what genes the human body actually had.

“The Human Genome Project helped us find a gene a day or at least a week,” he said.

Sophomore Sacha Chadwick said, “If you were religious, this was not a good presentation to go to. However, from a science point of view it was amazing.”

Melman concluded his presentation by answering questions from the audience.

“This really made me think,” sophomore Molly Gavin said. “It was interesting.”