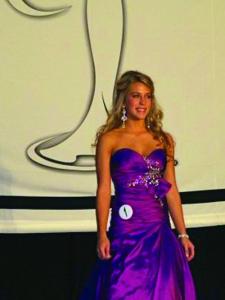 Contributed photo: Meryhurst College freshman Emily Adamski won Miss Congeniality at the 2009 Miss Teen Pennsylvania pageant.For average freshman athletes, their focus is on one of two things: their sport or their studies. On top of schoolwork, many student-athletes have either early morning or late evening practices.

This doesn’t even include time away for games. For the average athlete, there isn’t much time for anything but school, sport, and sleep.

Mercyhurst College freshman Emily Adamski has taken on far more than the average.

Adamski is a freshman defender for the women’s soccer team. However, her path to Mercyhurst isn’t one of a normal player.

She was not recruited coming out of McDowell High School in Erie. She originally fell in love with the campus, and its proximity to her home. Once she was accepted and decided to join the class of 2014, she looked into the soccer program.

Adamski said of her desire to play soccer: “A good friend of mine, Gabrielle Catrabone, is on the team, and I played with her in high school, so I thought why not try out for soccer?”

After speaking with head coach Keith Cammidge, she was on the team.

Most soccer players practice heavily throughout the offseason, to prepare for the following fall.

Emily tried something else out. She entered the Miss Teen Pennsylvania 2009 pageant.

She got into the pageant process when she got a package in the mail saying that someone had nominated her for Miss Teen Pennsylvania. She says, “To this day I still do not know who did that, but once I read about it, I begged my parents to allow me to do it and eventually they said yes.”

Once in the pageant, Adamski found success. Being her first pageant, she was very happy with her third place finish overall, and voted Miss Congeniality as well.

Adamski said pageants and soccer are two completely different things. Soccer is obviously team-based, while a pageant is purely solo.

Although there are differences, pageants have helped in her soccer career. “I think it has helped me to get the confidence as an individual that I can go up there get it.”

Her confidence remains high, even though she does hear her fair share of jokes in the locker room.

Other players imitate pageant walks; even the trainer gets in on the fun. Since she trains for both soccer and pageants, the trainer insists its “all soccer training.”

Admaski sees it all in good fun.

Despite being Miss Congeniality, Cammidge describes Adamski “as one of the more aggressive players on the team.”

Even though Adamski is only a freshman, she is taking on a large workload.