Each week during the 2010-11 school year, The Merciad selects three stories about the college’s history. These story excerpts from our archives are posted to The Merciad Online on Thursday afternoons.

The presidential election of 1972 promises to be a very curious spectacle indeed. Richard Nixon is predicted to win by a landslide margin. The latest polls show him as having 59 percent of the vote compared to 36 percent. Logically, you begin to wonder why McGovern only has 36 percent of the popular vote so far, because his positions are not as spurious and nebulous as Nixon’s are.

For instance, why did Nixon wait until two weeks before the election to disclose his secret talks about peace in Vietnam? Is it because he felt people would say, “At leas the tried,” or “He finally brought peace to Vietnam”? Either way, he feels he has won popular support through his ingenious scheme. Also, why hasn’t Nixon come out either one way or the other in reference to the Watergate affair? Does Nixon condone campaign bugging and snooping? Does Nixon respect the rights and privileges of private citizens?

…On a point by point basis, considering various problems of the nation such as Vietnam, inflation, jobs, drugs, amnesty, corruption, and foreign policy, it seems that George McGovern, the “prairie populist,” should get our endorsement.

A week ago, the Little Lakers defeated Carnegie Mellon, 22-14, then early this week edged Washington & Jefferson, 28-25.

Freshman quarterback Mike Wydo led the Mercyhurst J.V. football team to a pair of wins. Wydo connected with Tom Hemer on a 42-yard touchdown, then the pair added the two-point conversion at Carnegie Mellon. Fullback Tom Gault scored on runs of six and one yards while adding a two-point conversion run.

Wydo threw for four touchdowns to hand W & J their first defeat. He hooked up with Hemer on 25 and 12-yard scoring aerials, adding two more to Greg Fitzgerald. 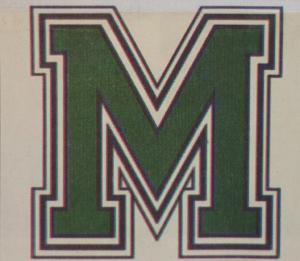 Merciad file photo: As of October 2002, Mercyhurst’s new athletic logoIn the past 76 years, a lot of changes have taken place on the Mercyhurst campus. New buildings have been added and males have been able to enroll. The male population as Mercyhurst is increasing with every new school year, and there have been numerous sports teams added.

The “M” will make it a lot easier to be put on publications instead of the clipper ship. The new logo also helps to standardize Mercyhurst; the “M” can now be found on different apparel, as well as on the gym’s floor.