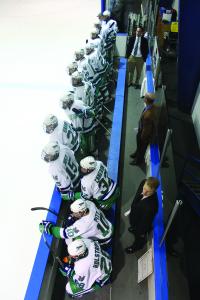 Since its establishment in 1971, the CCHA has become one of the NCAA’s elite conferences.

Its current 11 teams boast nine of the past 27 national championships.

And unlike the AHA, where teams are limited to distributing 12 scholarships, CCHA teams can fund the Division I limit of 18 scholarships.

These scholarships can provide programs with a major boost in recruiting ability.

A year ago, the CCHA stood as a 12-team league, but went to 11 after the 2009-10 season when the University of Nebraska-Omaha departed for the Western Collegiate Hockey Association.

The application for CCHA membership would cost Mercyhurst a non-refundable $10,000 fee, which is deducted from the $250,000 that all new conference entrants must pay.

This may seem an exorbitant amount of money, but there were very valid reasons to examine joining the CCHA.

The farthest the team would travel would be a bi-annual trip to Alaska. However, the next farthest is Northern Michigan.

The Lakers would travel considerably less distance than they currently do.

Their AHA schedule now involves trips to seven out of 11 schools more than 350 miles away.

The next perk would be the six additional scholarships available for the team.

“There is nothing concrete about moving conferences,” said Director of Athletics Joe Kimball, who made clear no paper was involved during the school’s inquisition. “Just some phone calls looking into it.”

While the positive aspects of switching conferences remain, a considerable amount has changed in college hockey that points to Mercyhurst staying put for now.

This season, Penn State announced its intention to join the ranks of men’s and women’s Division I hockey in 2012-13.

If there were to be a Big Ten conference, it would mean other schools with Division I hockey such as Ohio State, Wisconsin, Minnesota, Michigan and Michigan State would likely follow.

With these changes accounted for, the CCHA would then be down to eight teams left from its current list, leaving Mercyhurst at a crossroads.

Why bother jumping conferences at a steep price, when three of the higher profile teams may leave within the next few years?

Thus, there has been no movement in switching conferences this season, according to coach Rich Gotkin.

“The big issue is the college hockey landscape is changing in a big way,” Gotkin said.

Gotkin also mentioned how there are teams in the league who would also seemingly join the same conferences eventually.

It makes no sense that the only two universities with Division I hockey in Alaska-Fairbanks and Anchorage, should be in different conferences.

It seems that these changes are certainly in the works, and make sense for all involved.

If the three Big Ten schools leave the CCHA, who is to say Mercyhurst wouldn’t be offered a spot for a much smaller price?

Gotkin added his current stance is to “wait until the smoke clears.” Kimball agreed.