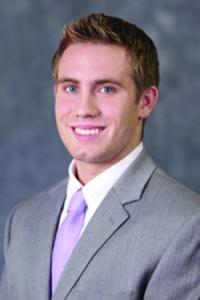 Sports Information photo: Mercyhurst College freshman Nate Jensen hopes to continue a long family line of successful hockey players.Every child has a dream, whether to become a skilled physician or a professional athlete.

Ever since he was a young boy, hockey has been the centerfold of his life.

From the beginning, Jensen’s dream was to follow in his father’s footsteps by playing hockey at the professional level.

Those are lofty goals, but Jensen feels confident he can undertake the challenge.

His father, Dave Jensen, played three seasons with the Minnesota North Stars of the National Hockey League and represented the United States at the 1984 Winter Olympics.

His uncle Paul also played for Team USA, participating in the 1976 Olympics.

“I have always looked up to my dad,” Jensen said. “As soon as I could skate, I was encouraged to play hockey at a high level.”

His father opened his eyes to the value of the sport and ways to harness this tool throughout life.

“My dad taught me to be a good hockey player, but also how to be a good person through hockey. It has taught me several life lessons: the value of teamwork, leadership, to be positive when there is adversity, but most of all, it taught me to have fun in whatever you are doing,” Jensen said.

His family keeps him motivated, as he strives to surpass his cousins.

Three cousins also play hockey either at the collegiate or professional level.

With the four of them, competition comes naturally.

“My family is all about hockey when we get together,” Jensen said. “There is definitely bragging rights on the line when we play pick-up games, so they are pretty competitive.”

Growing up with a twin, the brothers constantly pushed each other.

“We would battle in everything we did,” he said.

Although his family played at larger schools––his father at the University of Minnesota and his uncle at Michigan Tech––Jensen chose Mercyhurst to be his stepping stone to the next level.

“I had some options to play elsewhere, but when I came on my visit, I liked what I saw and felt this would be a good fit for me,” he said.

Jensen recently started his freshman season at Mercyhurst, where he plays defense for the Lakers.

“Nate has seen a significant increase in playing time since the start of the season,” said Assistant Sports Information Director Erik Kaminski.

Prior to Mercyhurst, Jensen played for the Tri-City Storm of the United States Hockey League (USHL).

During his time there, he scored seven goals and assisted on 20 others.

The Storm recognized him as Defenseman of the Year.