For a half dozen Mercyhurst College sophomores, seemingly cold-like symptoms ended up something more last month. 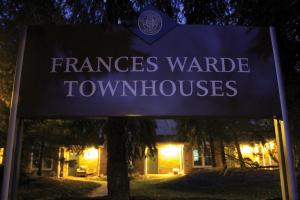 Ethan Magoc photo: The carbon monoxide leak at Mercyhurst took place in one of the Frances Warde Townhouses.

Farbizio, Norton and Null arrived at their Warde townhouse Oct. 6 around 5 p.m. They came across a recognizable smell, one that is associated most with exhaust pipes or even Bunsen burners.

But since they do not have a gas stove, this seemed peculiar.

When two other roommates came in and ignored it, the students soon did too. But a friend of theirs eventually set off a trigger.

After being in the girls’ townhouse for about an hour, sophomore Raaj Chanda started experiencing unexpected symptoms.

“All of us were feeling sick, but after Raaj said he felt sick, we knew something was wrong,” said Norton.

At 9 p.m., the girls called Police and Safety, who later arrived with Maintenance staff.

Both Police and Safety and Maintenance inspected the apartment but initially found nothing. The students told them they believed it dealt with gas, but no one could detect the source.

Farbizio’s parents, concerned about the safety of their daughter and the rest of her roommates, made another phone call to Police and Safety. They advised Police and Safety to send the fire department to check the townhouse immediately, which they did.

What they found was remarkable and has led to increased campus safety measures.

Assistant Vice President of Student Life Laura Zirkle, said she was first concerned for the students’ safety, then confused by what she called a “very flukey incident.”

“We all felt like we were high at all times of the day,” Norton said.

The girls checked into the hospital that night. With the exception of Smith and Tambasco, all had levels of carbon monoxide. Norton and Farbizio’s levels were borderline dangerous, requiring them to be treated with oxygen masks.

Back on campus, the students slept at a Briggs Avenue apartment until the fire department and Maintenance secured the townhouse from any lingering monoxide.

“It was a hard time going through this, especially because mid-terms were coming up,” said Farbizio.

The incident spurred quick action from the Office of Student Life, as Zirkle and Dr. Gerry Tobin worked with Ken Stepherson, the college’s physical plant manager. They ordered and have installed carbon monoxide detectors in most campus residences with either gas appliances or a gas furnace.

“Not every apartment has them installed quite yet,” Zirkle said. “We got them into Warde pretty quickly, but the rest will go in during the next few months.”

She also allayed any student concerns that monoxide leaks could become prevalent in Mercyhurst campus housing.

“This was a situation where there was a very specific problem. There’s no reason for us to be concerned this may go on in other places,” Zirkle said. “It’s simply a precaution because it’s so hard to detect. We’d rather be safe than sorry.”