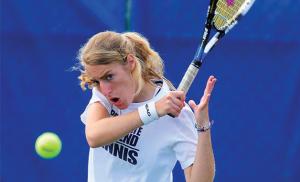 Behrend Beacon photo: Junior Leslie Durante won fourth singles for Penn State Behrend during the AMCC Championship.There is only one word that can properly describe the women’s tennis team here at Behrend: unstoppable. The team won their sixth straight AMCC title in dominating fashion last week. Even more impressive is that the Lady Lions have won the title 10 out of the 13 existing years of the AMCC.

“I feel proud that we have been able to hold the title for so many consecutive years,” said team captain Elissa Swartz.

They will continue on to the NCAA tournament in the spring.

This was the first time any team in men’s or women’s tennis had accomplished this in AMCC history. All six singles and three doubles teams came up victorious in their matches. Four out of the six playing singles won their third straight title.

Arica Christman placed at first singles, Stephanie Cattron at second singles, and Hillary Lasher who took the third singles title for the second time after taking the fifth singles title in 2008. Rounding out the pack is Leslie Durante at fourth singles.

One title was not enough for Christman; she took the first singles title, but also was a part of the first doubles team that took that crown. This is the second time she has taken the doubles title.

“I was really glad to keep my singles title because that is what I have worked hard for all season,” Christman said. “As for doubles, my partner and I both played really well and got our conference win back.”

Coach Jeff Barger, who has been voted AMCC Coach of the Year eight times, has proved that his title has been well-earned. He is very excited for this team and is looking forward to the NCAA tournament in the spring.

“We have been very lucky to have some outstanding players here at Behrend,” he said. “They work very hard and do what is asked. My success goes hand-in-hand with that. We also have a great group of seniors that has been a good example to others.”

With the holiday season quickly approaching, Gannon University students rolled out of their beds Saturday morning to knock on Erie’s doors for the 38th annual Golden Harvest. The result was 12,919 pounds of food for locals who may have otherwise had a difficult time finding a Thanksgiving dinner.

More than 230 students, faculty and staff volunteers participated in the event. They collected 6,051 pounds of food and $404 in monetary donations, which provides 17 pounds of food per dollar, said Stephanie Achille, assistant director of programming for the Office of Student Living.

Achille said donations were taken to the Second Harvest Food bank of Northwest Pennsylvania to be distributed to local shelters and used for Thanksgiving dinners and Christmas baskets.

“It’s great to see everybody get involved,” she said.
Younger students from schools on Erie’s East side kicked off the event by bringing the first official donation to Yehl ballroom, where the volunteers had a continental breakfast before loading onto buses and filtering into the designated neighborhoods.

Volunteers represented many different campus organizations, including Greek organizations and freshman residence halls, said Josh Reda, assistant director of student living. He also said that Gannon’s football team collected donations at their game that day since they could not go door-to-door during the event.

With the help of Student Living and all of the volunteers, Achille said that the community seems to respond immensely to the event each year.

“Around Thanksgiving time, in the season, people want to donate and contribute,” Reda added.

In the past, Achille said that Gannon has received the Second Harvest Food Bank’s Bread Basket Award for its Golden Harvest contributions.

“It’s obviously a good event, because we continue to do it year after year,” she said.

Junior English major Stephanie Smith said that she had fun at the event, and that it seemed like the community was rather responsive to the students collecting food.

“I liked that it started later this year,” she added. “It didn’t feel like we were waking people up or bothering them, because most of them were already outside doing yard work or washing their cars.”

Achille said that Penn State Behrend and Mercyhurst College also participate in the event, as all three schools work together to help boost food donations during this time of year. While Gannon tackles the larger community, Behrend students collect donations on their campus and Mercyhurst students ask for donations from their surrounding neighborhoods.