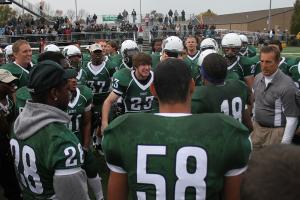 Freshman Matt Wenzel, a 19-year-old defensive back from South Euclid, Ohio, was charged Sunday with a felony count of aggravated assault, misdemeanor resisting arrest and summary counts of public drunkenness and disorderly conduct, according to a report from the Erie Times-News.

The charges stemmed from an incident that occurred early Sunday morning outside the Hammermill Library. Wenzel was reported to be banging on the door of the library, then found urinating on the building when campus police arrived just before 12:45 a.m.

He ran from the officers, then allegedly elbowed one in the face.

After the assault, Mercyhurst Chief of Police and Safety Robert Kuhn made the decision to involve the Erie Police.

“When my officers are injured in an attack like that, I’d rather have another agency handle it,” Kuhn said.

The Lakers earned a home berth in the upcoming PSAC title game after defeating Clarion, 38-14, on Saturday at Tullio Field. Wenzel had yet to play in one of Mercyhurst’s games this season.

After Saturday’s win, Wenzel posted a celebratory message to his Facebook wall at 3:11 p.m.

According to the Times-News, Wenzel was taken home by his parents after posting a $5,000 bond.

Wenzel’s status as a member of the varsity football program or as a student at the college is not yet known.

Associate Vice President for Student Life Laura Zirkle said a student will generally be punished if they violate any part of the student conduct code.

Due to privacy policies, she was unable to release any specific information regarding a potential Mercyhurst disciplinary action toward Wenzel.