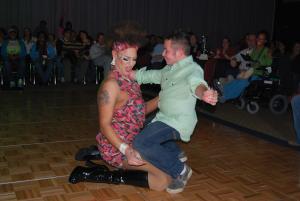 These performers came from Pittsburgh, New Jersey and even one from Erie, stealing titles from pageants everywhere. The six drag queens took turns tearing up the floor (and the students) for almost three hours.

The audience could not help but interact with the dancers, holding money over friends’ heads for lap dance, kisses, or harassment.

“Sasha was my favorite, but they were all really good,” said Behrend undergraduate Aundrea Luczak.

Students Desiree Fajago and Anissa Chambers both said they came out of curiosity and to support Trigon. Ann fu Young dedicated her second dance to “all those who have taken their lives due to bullying because of their orientation.”

For her last dance of the night, Angelique chose six people from the crowd to be put on a chair in the middle of the dance floor for lap dances.

“It was all in good fun,” said Behrend undergraduate Matt Smith, who didn’t initially seem happy to have been chosen, but had a huge smile on his face when he walked away.

The dancers were happy to see that there were more people that dressed in drag this year. A total of nine students dressed in drag to compete in the best “costume” contest compared to last year’s three. The winner was chosen based on how loudly the crowd cheered for the contestant.

The winner was very clear when Miss Ramona strutted his stuff and the room nearly exploded with applause. Ramona and Ms. Kinoshi took first place.

Ramona (Behrend undergraduate Ray Wolken) walked away with a $50 gift card to the Olive Garden. One of the other contestants, Kyle Reilly, said that he dressed in drag because “it’s just fun, plus my fiancée talked me into it.”

The show ended with Sasha Fierce and Ann Fu Young dancing as Beyonce and Lady Gaga. The dancers were reluctant to end the show, as the student audience was wildly energetic and encouraging.

“I have been doing this for four and a half years, and I just love coming to Behrend! I drive six hours both ways because I love seeing how much bigger it is year to year,” Glitter Trix said.

“I like how involved they make the crowd get and how energetic they got us. It also opens our eyes to people that are different but the same,” said student Brianna Smith.

Gannon’s Garibaldi to move on

Gannon University President Antoine M. Garibaldi, Ph.D., made his future plans to serve as president at the University of Detroit Mercy official during a reception in the Yehl Ballroom Friday.

The news was released earlier in the day when the Most Rev. Donald W. Trautman, bishop of the Roman Catholic Diocese of Erie and chairman of Gannon’s board of trustees, held a press conference notifying members of the Gannon and Erie communities of Garibaldi’s approval as president.

Garibaldi, who will be the UDM’s first lay president, will begin his term at the Division I school July 1, 2011.

Trautman made the announcement early Friday sans Garibaldi as the president was in Detroit for a press conference as John D. Lewis, chair of the Detroit Mercy Board of Trustees, introduced him to UDM.

“President Garibaldi was selected by a Board vote after a national search that encompassed 60 candidates,” said Carl Camden, chair of the presidential search committee and UDM trustee. “We think President Garibaldi will advance UDM not only as an institution of higher education, but also as a community resource in the Detroit area.”

An emotional Garibaldi, fresh off his plane ride back to Gannon, confirmed the earlier news to an assembly of faculty, staff, students and community members as Trautman and Thomas Guelcher, vice president of Gannon’s board of trustees, flanked the President during his speech.

“As you can imagine this is a day of mixed emotions for me,” said Garibaldi, who has served as president for more than nine years. “Not only do I love Gannon – I’m passionate about this place.”

Gannon senior theatre and communication arts major Kathleen Cahill called Garibaldi a “truly genuine man” who will be missed by the Gannon community, especially since he took so much time to get to know the student body.

“I’m not sure how he does it, but he knows just about every student on campus and what they are involved in,” she said. “It’s very rare that students go acknowledged by a university president by name and is asked how they are doing in their major and extracurriculars.”

Joe Witkowski, a junior sports and exercise science major at Gannon, said that although it’s unfortunate Garibaldi is leaving the Erie campus, the UDM community will benefit from his presence.

“When he sees you, he knows who you are and always says hi,” he said. “It gave that welcoming feeling, even from someone as busy as Dr. Garibaldi.

“He has done a lot for Gannon – maybe its time for him to help out another college.”