Jessica Borowczyk: dancing into the future 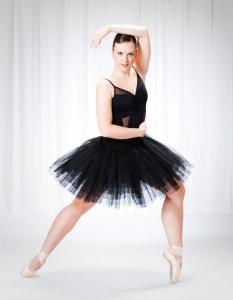 Contributed photo/Rick Klein: Mercyhurst dance major Jessica would like to someday perform in either a ballet or contemporary company.Like many dancers, senior dance major Jessica Borowczyk started at a very young age, pointing her toes from age 3 for a local studio in her hometown of Naperville, Ill.

That love has carried her to where she is today.

After taking classes at Von Heidecke’s School of The Chicago Festival Ballet, as well as The Academy of Dance Arts, ABT, The Washington School of Ballet and Boston Ballet, Borowczyk started looking for dance opportunities in college.

Certain that a ballet program was the right choice, Borowczyk was drawn to Mercyhurst’s acclaimed curriculum. Three performances with varying styles and strong academics, as well as the small and lovely campus also drew Borowczyk into the Mercyhurst community.

“I like that the dance department feels like a family. Everyone is really close and supports each other.” Borowczyk said.

Aside from Mercyhursts’s tight knit community, Borowczyk has had the opportunity to perform in many different areas since arriving to the College. Borowczyk was fortunate in being a part of the Lake Erie Ballet during her time as a Mercyhurst Dancer, giving her the chance to test out what it is like to be in a real company.

She also appeared in many performances put on by the Mercyhurst Dancers throughout the year and cites particular interest in the winter term show, Raw Edges, choreographed entirely by Mercyhurst dance students.

“I think it challenges me the most in a style other than ballet and I love to see what great choreography my peers come up with,” she said.

In addition to her successes on the stage, dance is not all that is on Borowczyk’s plate, as she is a double major in World Languages and Cultures.

She studied abroad in Paris this past summer.

Borowczyk also serves as president for the dance honor society Nu Delta Alpha, which has helped her to find her voice and grow.

As graduation approaches and Borowczyk looks to the future, she aims to be a performer in either a ballet or contemporary company.

Teaching also interests Borowczyk and she hopes to attain a teaching certificate. Teaching ballet is a passion, but Borowczyk also hopes to be a high school French teacher when her performance career has ended.

Although dancing professionally can be a daunting task, Borowczyk’s Mercyhurst education and experience in dance is sure to lead her to a great future.