“I’m a big fan of comedians with guitars,” junior Amber Kissman said after the show. She thoroughly enjoyed the act, which combined elements of comedy and improvisation with music.

Wecksell, a native of Great Neck, N.Y., created an act inspired by the performances of some of New York’s most renowned comedians.

Wecksell has appeared on VH1’s “I Love the 80s 3D,” “I Love the 70s II” and “I Love Toys.” He has also released his comedy songs to radio outlets including the Dr. Demento Radio Show, Sirius and XM.
Along with taping the fourth season of “America’s Got Talent” and working on his first feature film, “Columbus Circle,” Wecksell continues to tour college campuses across the nation.

In a new song which debuted at Mercyhurst, Wecksell pokes fun at the college experience of drinking: “Staggering drunk girl, a lightweight in every sense, thinks the world revolves around her, but that’s only dizziness.”

Sill, he warns of the dangers of drinking halfway through his song, cautioning that “you do have to be responsible.”

Although Wecksell ad-libbed a fair portion of the show, the comedian had obviously done his homework. Wecksell visited the campus, and after touring the new residence hall Friday afternoon, he joked, “When I say Warde, you say hotel.”

He also topped his list of “Top Ten Things about Mercyhurst College” with, “You’re not Gannon!”

The comedian supplemented his act by pulling volunteers onto the stage and holding a contest inspired by fmylife.com, which ended in one student winning one of Wecksell’s CDs, titled “For The Mortgage.”

After the show, Wecksell sold these CDs to raise money for the New York City Marathon for Fight for Kids, a charity which attempts to prevent abusive psychiatric treatment and over-drugging of children.

For any new Wecksell fans, or any of those who did not attend the show but wish they had, this fall the comedian will continue to tour colleges not only as a single act but also as a part of “College The Musical: A Musical About College,” an original musical comedy set to debut in October. 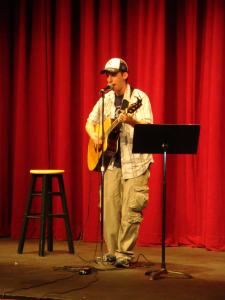