The highly acclaimed film “That Evening Sun” will be presented in the Mary D’Angelo Performing Arts Center today at 2:15 p.m. and 7:15 p.m. through the Guelcher Film Series. 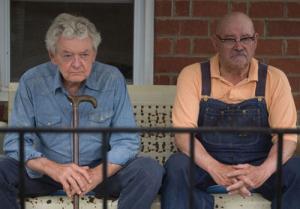 Contributed photo: ‘That Evening Sun’ is being shown at the PAC at 2:15 and 7:15 p.m. Tickets are free for Mercyhurst students.

The film series, which presents independent and foreign films each Wednesday, offers an incredible opportunity to Mercyhurst students and the Erie community at large. The series has hosted such acclaimed films as “Atonement” and “The Wind that Shakes the Barley.”

The series is now showing a film sure to astound all sorts of film fans alike.

“That Evening Sun” opened in March 2009 at South by Southwest and immediately went on to collect over 22 awards from film festivals and more, such as the Top Honor Wyatt Award and a New York Times Critics’ Pick.

Based on the short story “I Hate to See That Evening Sun Go Down” by William Gay, the film follows the story of Abner Meecham, an elderly man who tries to return to his farm after being placed in an assisted living facility by his son.

However, the property in Tennessee that Meecham has loved for so long is being rented out to another family. Meecham moves into an old shack on the property and refuses to leave, as does the tenant, each making claims to the land.

Anger escalates and boils under the hot Southern sun as the two men make desperate and enraged efforts to secure a home they each consider to be rightfully their own.

The film stars Hal Holbrook and Raymond McKinnon in outstanding performances, which have received great reviews by all.

Ain’t It Cool News says, “Wonderful … Hollbrook is brilliant. This film absolutely deserves to be seen.”

According to the New York Times, the film portrays exactly “the sense of rootedness and contentment felt by farm people who have not much else to show for their labors besides their land and their houses.”

The story is a classic Southern gothic, letting the audience feel the confronting humidity that puts everyone on edge and is sure to be full of exciting and dramatic confrontations. It is surely a story full of the idea of home sweet home and is well worth seeing.