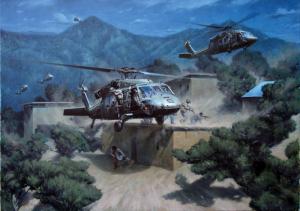 The event is not only a celebration for Selman, but also for Mercyhurst alumnus Eric Carlson, who is featured in the painting.

Selman, a south-central Pennsylvania native, works in the Western fine art market, primarily in military printmaking. He paints both historical and modern war scenes, as well as other subjects related to times of war.

His recent work, “No Safe Haven,” depicts one of the many high-risk air assaults conducted by the 82nd Airborne Division and 7th Special Forces Group (Airborne) in Eastern Afghanistan during 2007.

Carlson was serving as a UH-60 Blackhawk pilot with the Division at the time, working with the 7th Special Forces Group.

Selman used actual footage of an Apache Attack Helicopter to create “No Safe Haven.” In the painting, Carlson is depicted piloting the UH-60 Blackhawk.

Selman wrote in his description of the painting, “Thanks to our military, there is nowhere in the world terrorists will feel safe.”

There is nowhere American soldiers will not chase them to, and as this painting depicts, there is no such thing as a ‘Safe Haven,’ and there will be no sanctuary for terrorists as long as the 82nd Airborne Division and US Army Green Berets remain ‘on point’ for the nation,” he wrote.

Prints of the painting were sold throughout the U.S., many of which were signed by Carlson and his comrades. The director accepted the original painting into the U.S. Army Aviation Museum on Tuesday, Dec. 14.

A painting’s acceptance into the museum has great significance for both Selman and Carlson, as every Army aviator who graduates Flight School receives his or her wings at the museum.

Now, every Army pilot earning their wings will be able to see Selman’s work, reminding them of what being an Army aviator really entails.

Carlson’s brother, Capt. Ernie Carlson said, “The painting is now on display where every aviator from this day forward, and anyone who visits the museum, will see this painting and the name of a product of Mercyhurst College.”

Indeed, Carlson has proudly shown what Mercyhurst graduates are capable of.

Eric Carlson is an Erie native who graduated from Mercyhurst Prep and Mercyhurst College.

He is a part owner of The Keystone Armory in Edinboro, an organization through which citizens can buy, sell and trade firearms and military collectibles or commemorative.

Carlson now works at Penn State Main Campus as part of the Nittany Lion Battalion Cadre, instructing future Army officers. He holds the rank of major, and is an MSIII Advisor.