Schaetzle goes for coach of the year 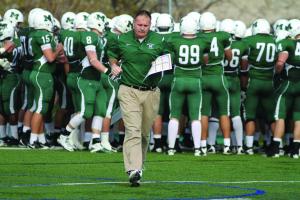 Schaetzle has gained national attention as a finalist for the 2010 Liberty Mutual Coach of the Year Award for leading Mercyhurst College to its first Pennsylvania State Conference title and to its first NCAA Division II National Championship playoff birth.

The Liberty Mutual Coach of the Year Award is given to a NCAA Division II football coach who has achieved coaching excellence throughout the 2010 football season.

Schaetlze made it to the final round as he was voted in the top 15 candidates on www.CoachoftheYear.com and by an objective-scoring model.

The objective scoring model considers criteria such as wins, team penalties, on-field sportsmanship, academic achievement by the student-athletes and civic and philanthropic endeavors.

To be considered for this award was a great honor for Schaetzle, but he does not take all the credit.

“It was great to be considered for this award.” Schaetzle said, “It was really an offshoot of what the players did this season, though.”

Schaetzle is not only happy with what this award will do for his career but what it means for Mercyhurst as an institution and his players.

“It is the work of the players that got us to this point, and it is really great to get our college’s name out there,” Schaetzle said.

Schaetzle has done a great deal of work to build up a Mercyhurst football program that before his tenure had lurked in the shadows of the college’s attention.

As the head coach, Schaetzle has had his ups and downs. This season was only the second that the Mercyhurst football program has finished with a winning record.

Despite these ups and downs Schaetzle has been resolute in his development of the program.

He has worked to greatly improve footballs facilities and widen the region of Mercyhurst’s recruiting.

Despite the highly successful season, Schaetzle still sees ways that he and the team can improve.

“Going forward, we need to learn to do a few things better such as scheduling practices if we make it deep into the playoffs again,” Schaetzle said.

Schaetzle is busy on the recruiting trail and has seen how a successful season can help.

“Our playoff run really widened our recruiting base,” said Schaetzle. “Now we know who we are and what we are about as a program.”

The winner of the 2010 Liberty Mutual Coach of the Year Award will be announced Jan. 10.