Student-produced horror flick in the making 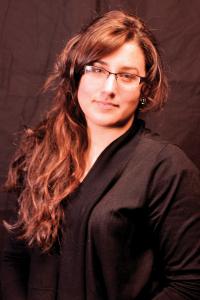 Tyler Stauffer photo
Hubbard’s winning script, “The Diary of Sarah Lucas,” is inspired by a haunting experience she had in Old Main.

Mercyhurst College senior Leah Hubbard is this year’s communication department’s script contest winner and will have the opportunity to produce and present to the college community her own horror film.

Each year, the winner of the script contest produces his or her script and shows the film in Taylor Little Theatre during Communication Week.

According to Hubbard, the story is similar to “Paranormal Activity” and “The Blair Witch Project.”

The story begins with the main characters ghost hunting and trying to prove to themselves that ghosts do not exist. They are proven wrong when the film’s antagonist, “A Menacing Thought,” played by Hubbard, is responsible for the disappearance of each of the film’s six characters.

“The film focuses a lot on what you can’t see,” Hubbard said. “It’s very Hitchcockian.”

The story is filmed through the eyes of Sarah’s character. The film starts with Sarah stating, “Hi, my name is Sarah Lucas and you might never see me again.”

In order for the film to scare the audience, Hubbard wants it to be genuine.

“I want real performances,” she said. “I don’t want people to be faking, and I want real reactions.”

After studying for a fashion test with a friend in the Old Main loft at about 2 a.m. one evening, Hubbard and her friend decided to take a break and venture to the Chapel.

According to Hubbard, the friend, frightened by Old Main’s history of being haunted, said, “Let’s not go into the chapel, the walls could bleed.”

The very instant Hubbard’s friend finished saying this, they both heard a clear and terrifyingly chilling female scream coming from the attic of Old Main. They immediately ran from the building.

“We were outside the building, but my friend left one of her $60 dollar pair North Face gloves in the attic, so we had to go back for it,” Hubbard said.

They were too frightened to go back alone, so they called Police and Safety. With the help of campus police, they searched for the glove, but the glove was not to be found in the attic where it had been left. Instead, the glove was found pinned with a push tack to a bulletin board next to the chapel.

“It was the scariest night of my life, and I knew that I needed to do something with it,” Hubbard said. “I needed to write about it.”
Hubbard has filled all the cast positions and is in early rehearsals of the film, but she still has crew positions to fill. Crew positions include editing, slamming doors, running past cameras and screaming in the halls.

Students who are talented screamers or are interested in helping out on the crew can e-mail Hubbard at lhubba21@lakers.mercyhurst.edu.

“It’s scary and people are going to love it,” Hubbard said. “I want everyone to be scared out of their pants.”