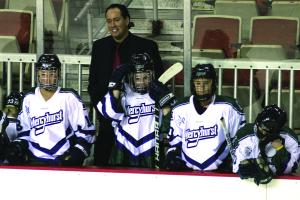 This level of prestige was cemented this weekend as head coach Michael Sisti achieved his 300th win on Saturday with a 12-0 victory over Brown University.

Sisti’s initial reflections on the win were not of reveling in the success that he had accomplished but a pure businesslike approach.

“As an individual win it was a win that we needed to have right now. Our margin of error is very small if we want to accomplish the goals that we set for ourselves this year,” Sisti said.

Sisti’s ability to take each game one at a time has led him to a level of success rivaled by few in women’s hockey.

He has been at the helm of the women’s hockey team since its inception 11 seasons ago.

Over that time he has compiled a 300-82-26 record and six appearances in the NCAA Tournament.

The Lakers have reached the Frozen Four twice in the past two years elevating to the elite of women’s college hockey.

Last season, the Lakers were the top-ranked team in the nation.

This level of success was never expected for a small-college program like Mercyhurst when Sisti was brought in to start a women’s hockey program.

“When this program started, many people saw it as a trendy new thing but over the years with a lot of hard work we have really turned it into something very successful,” Sisti said.

Since the program was started, Sisti has only coached one team without a winning record.

Sisti has credited much of this success to the great group of players and coaches he has been able to work with.

“I have really been able to work with a lot of great assistants, coaches and players and have been able to make something special here,” Sisti said.

There has also been a lot of hard work for Sisti who has to work with some smaller resources to accomplish a great deal.

“A lot of people think that coaching is just getting behind the bench and coaching games but there is a lot of work that goes on behind the scenes. As coaches, we work some very long hours,” Sisti said.

This preparation has been necessary for Sisti as his success has made a long waiting list of teams in the College Hockey America conference looking to dethrone the Lakers.

“With the amount of success we have had, there are a lot of teams in our league that want the success that we have and are constantly looking to knock us off the top of the mountain,” Sisti said.

This success has brought many big schools looking to bring Sisti in to run their programs, but Sisti has not been interested.

“There have been opportunities for me to move on to other programs but the administration has made it known to me that they don’t want me to leave and have done all they can to make this program successful,” Sisti said.

The administration recently showed its support to Sisti and the women’s hockey program when it built a weight room addition at the Mercyhurst Ice Center to supply the hockey program a workout space.

“I started this program 11 years ago. I have put a lot of time and effort into the program and really have a lot invested in it emotionally and physically to bring it to the level that it is at now,” Sisti said.

For Sisti being part of a big program is not the most important thing as a coach.

“One of the most satisfying things is being able to see these athletes go through our programs for the four years and get their degrees,” Sisti said.

Sisti has had a number of highly successful players throughout his tenure.

Senior Jesse Scanzano, juniors Hillary Pattenden and Bailey Bram have also participated in various tournaments for Canada.
Sisti’s ability to recruit these top players has been a key staple to his success.

Yet, some of his most memorable players have not been stars, as Sisti’s main enjoyment comes from seeing his players receive their diplomas after four years of hard work.

“Some of the most memorable players are those players who don’t necessarily get the most ice time but do a lot for the program in other ways and put those four years in,” Sisti said.