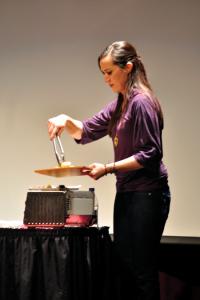 The presentation included a cooking demonstration, audience participation and a question-and-answer session. Afterward, students 21 years and older were invited to a wine-tasting session in the Faculty Dining Room in Egan Hall.

Catelli’s talk was sponsored by the Mercyhurst Student Government (MSG) Distinguished Speaker Series. The annual event consisted of two speakers this year–Catelli and Steve Lopez, author of “The Soloist,” this year’s freshman reading requirement. He spoke at the Mary D’Angelo Performing Arts Center in October.

“(They) were both received as recommendations back in the spring of last year,” she said. “I had received great interest from the college community about Steve Lopez and continuous interest about Chef Domenica.”

Unlike past MSG speakers, Catelli presented in the Taylor Little Theatre rather than the Performing Arts Center due to a scheduling conflict with the Cavani String Quartet’s campus visit.

During the presentation, Mercyhurst students’ cooking skills impressed Catelli. A quick poll revealed that 75 percent of the student audience cooked at least once a week, and several students cooked more than that.

Nevertheless, Catelli challenged students to cook twice a week. She said that the small change can make a difference in healthy eating habits.

She said that she wants to remind people that preparing and sharing food is something fun and easy.

Catelli recently released her first cookbook “Mom-a-Licious,” which teaches people to cook simple but healthy recipes that she describes as “fresh and fast.” She signed copies of her book after the talk.

Among other tips, Catelli told students to take advantage of college services such as taking the shuttle to Wegmans and eating at Egan Dining Hall, which is a “phenomenal cafeteria,” she said.

For the cooking demonstration, Catelli made a one-dish meal of chicken and vegetables using chicken tenders from Wegmans and vegetables from the cafeteria salad bar.

Catelli had the audience giggling throughout the demonstration.

Kissel said, “It was really fun how she had everyone interact during the presentation.”

During the cooking time, Catelli answered student questions, which ranged from cooking pasta and silicone cookware to “Iron Chef America” stories and her favorite food.

She gave away several cooking instruments, including a cutting board, lemon squeezer and toaster oven.

Among many other tips, Catelli advised students to cook meat at high temperatures, salt pasta water until it “tastes like the sea,” and heighten flavor without adding calories by using fresh herbs and spices.

Korczyk said, “I learned a lot actually, and I cook all the time.”

An hour in, many students seemed eager to test out their new knowledge.