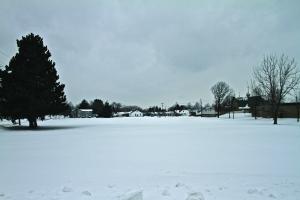 This snowy expanse at East 35th and Wallace streets could become a softball field construction zone as early as this summer.The Mercyhurst College softball team will have a new place to call home in the near future.

The college recently informed the softball team that it will build the Lakers a new field at East 35th and Wallace streets, three blocks north of the campus.

Players and coaches have described the team’s current playing field as being less than adequate for a Division II program.

“Most high school and junior college fields were in better conditions than ours,” sophomore Amanda Walker said.

Headley agrees with Walker about the state of their facility near Sam Jethroe Field at East 41st Street and Old French Road.

“We have traveled to some fields over the years, and ours is by far the worst I have seen,” Headley said. “When other teams come to our field, it is an embarrassment. A lot of the teams actually jeer us about our field.”

Headley and her players said a new field is overdue, though plans for an upgrade have been in the works for at least five years.

The college purchased the land parcel at East 35th Street for $232,000 in May 2005 from Saint Peter and Paul Byzantine Catholic Church.

The field’s construction would cost approximately $150,000, according to the athletic department?

In the past 10 years, Mercyhurst’s baseball, soccer, football and hockey teams each saw improvements to their facilities, while the softball team has been stuck in limbo.

The City of Erie owns and maintains the current space near East 41st Street.

“It has been a catch-22 for us, as we do not own our current field so we could not make any significant improvements to the field,” Headley said.

During the past few seasons, players and their parents would complain to the administration and plead for an improvement.

“A number of parents took an active role in lobbying and writing letters to the school administration encouraging construction of a new field,” senior captain Kara Gorgos said.

After much hard work, the Erie Zoning Hearing Board on Jan. 11 approved use of the property as a softball field.

“I was pretty excited. I’m just hoping that I will be able to use it,” junior assistant captain Jen Bower said.

Headley said she thinks a new facility would be a great help in taking her program to the next level.

The cost of the field for a sport that generally doesn’t bring in much revenue might draw criticism from some at Mercyhurst, but Headley is not fazed.

“If a school is offering a program, it has to be funded properly,” she said.