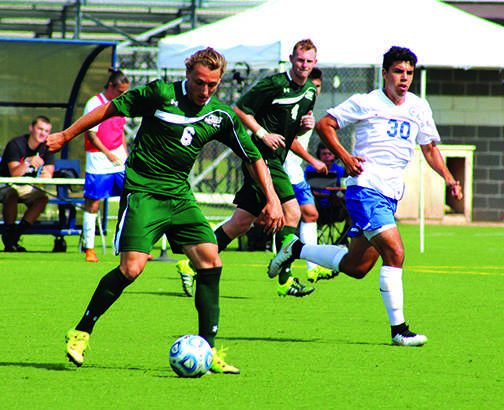 Junior defender, Michael Dirienzo (6), attempted one shot during Mercyhurst’s 3-1 loss to Notre Dame College on Saturday. This set the Lakers record to 0-2 on the season.

The Mercyhurst men’s soccer team, currently ranked No. 9 fell 3-1 against No. 24 ranked Notre Dame College Falcons on Saturday, Sept. 6. This set them back 0-2 to open their season.

It was an aggressive game at Tullio Field as the Lakers and the Falcons were two Top-25 ranked teams.

After only 6:22 into the match, Falcon’s Declan McGivern sent a shot into the net, beating Lakers goaltender, junior Nicholas Smith. The assist came from Falcon Felipe Silva and the Falcons quickly took the lead 1-0.

Junior Joseph Korb answered that shot in the 22nd minute of the game with a shot on the right side, making it a 1-1 game. Senior Richard Vanhorne was credited with the assist after sending a pass from the left side.

The score remained tied at the half.

At 5:53 into the second half, Falcons Reece Daly sent a corner kick to McGivern where McGivern then headed the ball into the net for his second goal of the match.

At 52:09 in the game, three yellow cards were issued over one play. Two were given to Lakers players, redshirt senior Thomas Davis and redshirt sophomore Michael Lennox. The other was issued to Renan Troccoli of the Falcons.

Less than 14 minutes later, the winning shot for the Falcon’s came from Arthur Favero off of an assist from Leonardo Paiva.

The high energy in the game led to a combined 29 fouls. 17 fouls on the Falcons and 12 on the Lakers.

The Lakers hope to pick up their first win of the season against West Chester University on Friday, Sept. 11, at 3:30 p.m. on the Mercyhurst soccer field. They will also be playing at home on Saturday, Sept. 12, at 3:30 p.m. against Bloomsburg University.