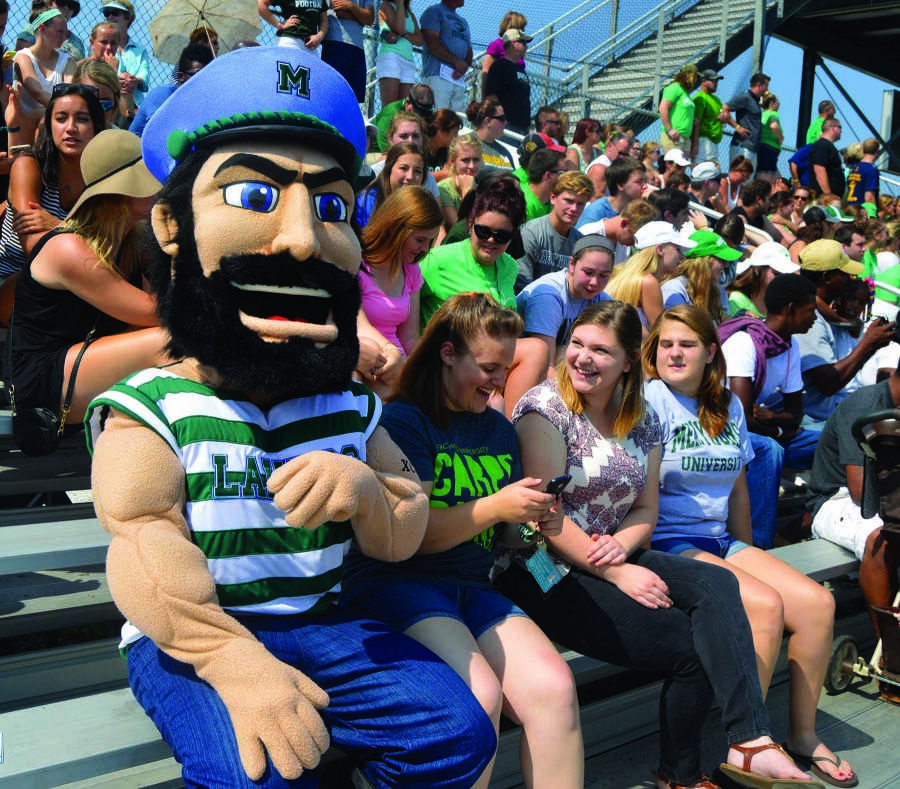 Luke the Laker spreads school spirit during the football game against Bentley University.

Mercyhurst unveiled Luke the Laker, the school’s new mascot, at the football game against Bentley University on Saturday.
Due to the flooding in the Carolyn Herrmann Student Union last semester, Louie the Laker, the university’s former mascot, was destroyed and needed to be replaced. The idea for Luke and his story, headed by Preston Reilly, activities and spirit coordinator, and the Campus Involvement Center staff, was a collaborative effort by many departments around campus.
“We talked to the bookstore, we talked to athletics, we talked to Earleen Glaser, she’s in the archives down in the library,” said Reilly. “She’s absolutely wonderful and has any kind of piece of history you could ever want to know about Mercyhurst.”
With the help of Chris Norris, web/social media/video coordinator and Sean Cuneo, marketing director, Mercyhurst released a video prior to the game, introducing Luke and his backstory.
According to the video, Luke, nephew of deceased Uncle Louie, grew up on Lower Baggot Street in Dublin, Ireland. He was a fisherman on the Irish Sea until the time came for him to sail to Erie to take Louie’s place as Mercyhurst’s mascot.
Filming for the video took place on the Mercyhurst campus as well as in the Erie community.
“We actually went down on the Brig Niagara, those boat ships, you know all those shots that we had there, him looking up at the American flag. That was a big part of Erie history that we wanted to kind of plug into there as well,” Reilly said.
A group of students have been chosen to wear the costume. However, their names will be kept a secret.
Reilly said Luke will be even more active than Louie was, and in addition to attending sporting events, he will roam the campus.
“That’s one of our goals is to get the mascot more out there,” said Reilly. “I wouldn’t be surprised if you’re walking through Garvey Park on a Wednesday morning and all of a sudden you see him jump out and give you something, some candy or something like that.”
Luke has a tattoo of an anchor and the number 94 in roman numerals on his arm. This is a tribute to his predecessor, the original Mercyhurst mascot the Old Man in the Sea, born in 1994. The Old Man in the Sea was followed by Louie and now Luke.
Students at the football game this Saturday witnessed Luke’s first appearance.
Junior Criminal Justice major Kelly Peters had not seen the video at the time of the game, but still had a comment to make about Luke.
“He looks a little intimidating which is a good thing,” Peters said.
“I think he looks cool. He looks cooler [than Louie] and he has a beard. The video was cool,” said senior Music major Michael Hibbler.
Senior Graphic Design major Megan Steele said, “I feel grateful that Luke was able to make the trip over to represent the school. From what I’ve seen today he would make his uncle proud.”