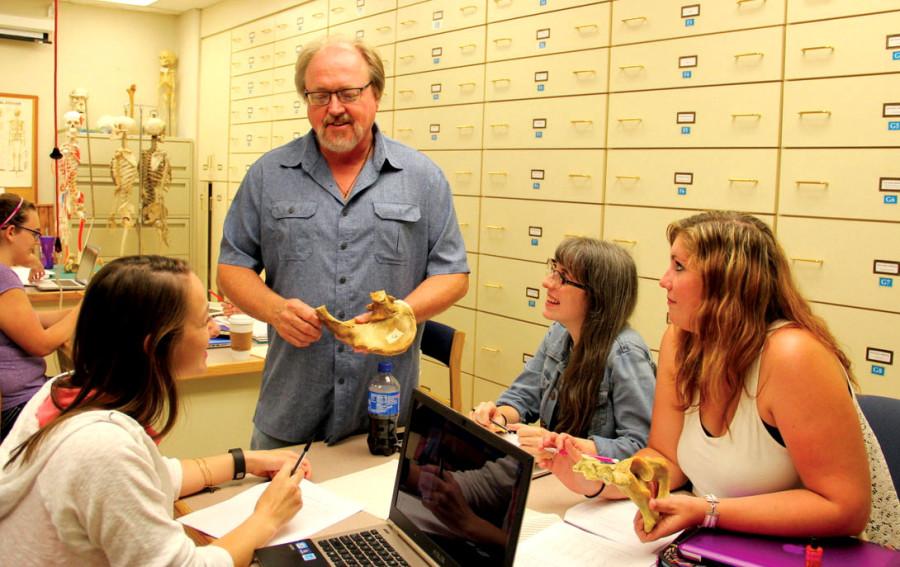 Dirkmaat instructs students on the Phenice method of sex determination.

Mercyhurst’s Applied Forensic Anthropology Program recently recovered fragmented human remains of Spanish Influenza victims at Schuylkill County, Pa.
The Schuylkill County coroner contacted Board Certified Forensic Anthropologist and Director of Applied Forensic Sciences at Mercyhurst, Dennis Dirkmaat, Ph.D., to take a look at remains found in a cutback bank, where construction workers were building a new road.
An archaeologist associated with the Pennsylvania Department of Transportation (PennDOT), did background research on the area where the fragmented bones were found and determined that it was likely a mass cemetery from the 1918 Spanish Influenza pandemic.
Mercyhurst’s Forensic Recovery Team, composed mostly of graduate students, went into the field where the remains were discovered. The team then determined that the remains are forensically significant.
“It’s an opportunity to get them experienced,” Dirkmaat said.
Mercyhurst’s Forensics department has the reputation as being one of the best, with years of recognition in the field.
“We have a reputation throughout Pennsylvania, New York and Ohio, as the best forensic anthropology team in North America. Any coroner that comes across remains in an outdoor setting will give us a call about it,”said Dirkmaat.
“Mercyhurst is well known through our department of Applied Forensic Sciences. I’ve been here since ‘91 so we’ve created basically the best forensic anthropology program in the country,” Dirkmaat said.
The recovery team traveled to Schuylkill County, near Philadelphia, to collect the fragmented remains. Second year graduate student and duty manager, Jacob Griffin, contributed to analyzing data and writing the report.
Graduate student Kelsey Carpenter contributed, along with other grads in the recovery team,  by taking inventory of the remains. She helped organize them and write a clear and thorough report on the findings.
“It roughly takes a week to edit it because it goes through the department, the graduate students and professors look it over,” Carpenter said.
At Mercyhurst, even undergraduates have the ability to go on excursions. Senior Danielle Watson traveled with the team to help with the extraction.
“This is the first case I’ve been on that wasn’t just a search,” Watson said.
Griffin, Carpenter and Watson all thank the program for their experience at Schuylkill thus far.
“It’s the only program in the country. It’s world-renowned. So many people apply here,” Griffin said.
“It’s a fantastic opportunity. It’s hands on. You can apply what we learn in the classrooms to real life cases,” Carpenter said.
“You stand on the shoulders of those before you,” Watson said.
Dirkmaat explains there is more to just looking at the bones when it comes to forensic cases.
“Forensic Anthropology is known as, you look at bones from forensic cases and you’re able to tell the age, sex, stature and all that, but with my training, it’s important to recover the remains and understand what happened to the body,” Dirkmaat said.
With the Schuylkill County case, many bone fragments were recovered. The recovery team was able to recover the middle portion of a femur, the proximal and shaft of a tibia and the right bone of a fibula. The fibula is the most complete bone they recovered.
Griffin and Carpenter believe these bones all belong to the same person.
There was also a mandible, or lower jaw bone, recovered.  However, Griffin and Carpenter believe this bone is from a different human because it was found 5 meters away from the other collected remains. Unfortunately, only one tooth has been found so far in the excavation of the loose material.
All bones discovered are from adults.
Not only were bones recovered, but there were also traces of splinters of wood and rusted nails, indicating that the people may have been buried in coffins. Because there were only small traces of these, that can also determine how long they have been in the ground.
The Mercyhurst recovery team plans on heading back to Schuylkill County as soon as they get permission from the county. There is a discussion going on with Schuylkill County, PennDOT and the community on what the next steps should be.
“It has generated a lot of interest, so I would imagine people aren’t going to say, ‘well no just bury it.’ The money isn’t much. If you put in a 10 foot section of road and it costs millions of dollars, and here we’re talking peanuts. If the community wants to learn something from this short term excavation, it would be worthwhile,” Dirkmaat said.
The recovery team is waiting on what the next steps will be in this process.