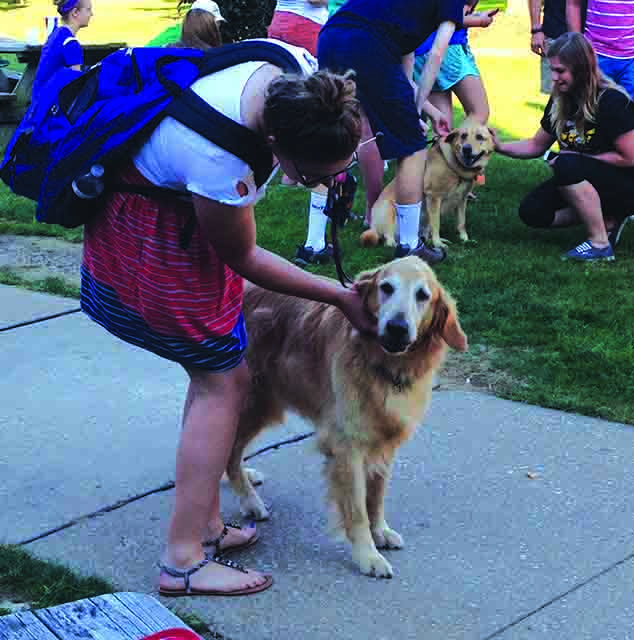 Stressed students gathered at Garvey Park on Wednesday, Sept. 16, to receive affection from local dogs. Some students went as far as to claim this event as “the best day ever.”
Each year, Mercyhurst invites locals, staff and students to bring their dogs to Garvey Park. This event was held in order to destress students, lift their mood and for the students, faculty and community to get together. The event provided hot dogs, candy, drinks and treats for the dogs.
The event started at 4:30 p.m. and continued until 6 p.m. Students that gathered at the park were able to speak with the owners and pet the dogs. This event brought every age group together, ranging from children to seniors.
Many faculty and locals have been bringing their dogs for many years. Over 20 owners brought their dogs to the event. Five owners brought their dog for the first time.
Students were able to feed Winston, a known dog among Music majors. Owners Michelle and Jeffrey originally wanted Winston to be a therapy dog. Instead, they have been bringing Winston to this event for the past two years.
By the time 5 o’clock hit, a high number of students gathered at Garvey Park and to see the dogs.
Many owners held onto their dogs as people approached them. Others let their dogs roam around and do typical dog stuff, like rolling around and sniffing other dogs. There were owners who played fetch with their dogs and showed students tricks they had taught their dogs.
Dogs breeds ranged from boxers to beagles. All of the owners were open to letting students pet their dogs and feed them a piece of hot dog or two.
Cindy and Jared, owners of a Boxer named Roxy, have brought Roxy since their dog was a pup. Cindy works in the Registrar’s office and often takes Roxy on walks around the Mercyhurst campus. Many of the owners who have been bringing their dogs for years do not plan on changing that any time soon.